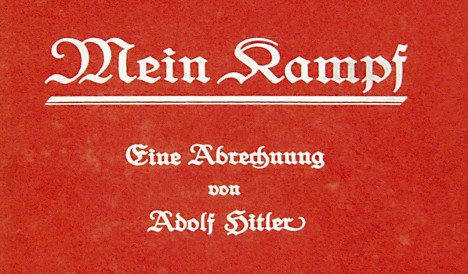 The southern state of Bavaria, which holds the rights, has not permitted reprints of the vicious anti-Semitic tract and rambling memoir since the Nazi leader’s 1945 suicide.

But it said Tuesday it would release an edition with historians’ commentary as well as a separate version for schools in 2015 before its copyright runs out at the end of that year in order to beat commercial publishers to the punch.

The head of the Central Council of Jews in Germany, Dieter Graumann, called Bavaria’s decision “responsible” and a “good idea.”

“If it is going to be released, then I prefer seeing a competent annotated version from the Bavarian state than profit-seekers trying to make money with Nazis,” he told news agency AFP.

“I would of course prefer it if the book disappeared on a dust heap of contempt but that will not happen,” he added, noting that the text was already widely available to Germans on the internet.

The book is not banned as such in Germany but because of Bavaria’s blanket refusal to permit sales of old copies or reprints – even taking potential publishers to court – the decision marks a historic step.

Bavarian Finance Minister Markus Söder said Tuesday that the state aimed to release an edition filled with respected historians’ commentary that would be impossible to use as far-right propaganda.

“We want to make clear what nonsense is in there – with, however, catastrophic consequences,” Söder said of the book on which much of the Nazis’ genocidal ideology was based.

A spokesman for his ministry said Wednesday that the state had proceeded extremely carefully.

“We are aware of our responsibility,” the spokesman, Thomas Neumann, told AFP. “We believe we can demystify the book with a clean edition.”

The German press appeared largely unfazed by the decision. The often excitable top-selling daily Bild put the news on its front page but in a short, matter-of-fact article.

And the website of influential news weekly Der Spiegel published a longer, neutral piece albeit with the provocative headline “‘Mein Kampf’ to Become School Book.”

Bavaria intends to stump up €500,000 ($661,000) for the project and will reportedly publish an English edition, an electronic book and an audiobook in addition to the German annotated version and the school text with commentary targeted at a younger audience.

Hitler wrote “Mein Kampf” (My Struggle) in 1924 – nine years before he rose to power – while serving a prison sentence in Bavaria following his abortive Beer Hall Putsch the previous year.

The two-volume work combined elements of autobiography with his views on Aryan “racial purity”, his hatred of Jews and his opposition to communism.

Around 10 million copies were published in Germany until 1945, according to British historian Ian Kershaw. From 1936, every German couple marrying received a copy as a wedding gift from the Nazi state.

Bavaria made its decision after winning a court battle last month against a British publisher who planned to release parts of “Mein Kampf”, also along with commentary from historians.