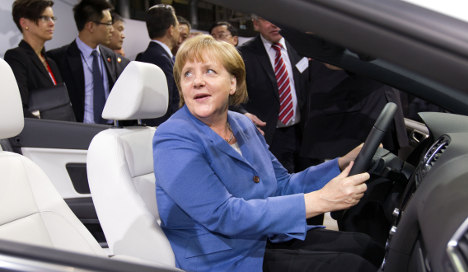 It came just hours before the small state of Saarland announced agreement had been reached there – a month after its election – to form a mini-version of such a coalition.

The state leaders of Merkel’s conservative Christian Democratic Union (CDU) and the left-leaning Social Democratic Party (SPD) said on Tuesday evening they would govern together, with the CDU as the senior partner.

Tuesday morning’s mass-circulation Bild newspaper led its politics coverage with the idea that Merkel could be ready to ditch the Free Democratic Party (FDP) if it fails to clear the five-percent hurdle needed to secure parliamentary representation in two up-coming state elections.

This would lend the Schleswig-Holstein and North Rhine-Westphalia state elections, on May 6 and 13 respectively, even more importance. The FDP failed to gain representation in the last five state elections.

Merkel, who has a record of ruthlessness when it comes to elbowing aside rivals within her own party, could be preparing to cut the FDP loose to save her own leadership of the government.

The moment may be a good one – latest polling figures suggest that a new election would push the FDP out of parliament altogether. But the SPD would not have enough support with its preferred coalition partner the Green Party, to form a government.

This leaves the “grand coalition” option – an alliance of the two biggest German parties – the CDU and the SPD – as the most likely option, giving Merkel the mandate to lead it as chancellor if the CDU is the biggest party again.

Bild quotes an anonymous senior FDP politician saying, “The chancellor sees her future in a grand coalition and could get it quickly.”

New figures from pollsters Yougov show that if the election were held on Sunday, Merkel’s CDU and Bavarian sister party the Christian Social Union would get 35 percent of the vote.

The SPD would get 26 percent, and the Greens would get 15 percent. The Pirate Party would get 10 percent, the socialist Left party would get six percent and the FDP just four percent – denying it parliamentary representation.

Such a result would mean that only a “grand coalition” would command a stable majority in parliament.

The most likely path towards this for Merkel would be to provoke the FDP with a parliamentary vote on an issue it deems crucial, like the financial transaction tax, which the FDP virulently opposes.

If the FDP refuses to support the government, Merkel could go to President Joachim Gauck and ask him to dissolve parliament.

This would save her from the embarrassment of calling a snap election herself, as her predecessor Gerhard Schröder did in 2005 – she has consistently said she would not “lose her nerve” like he did, Bild said.

The Frankfurter Rundschau daily paper carried a long report about the Bild story on Tuesday. The broadsheet argued that the mere fact of the Bild’s story was as significant as its content.

“The newspaper with millions of readers does not only report on the politics in Berlin, it makes them too,” the paper concluded.