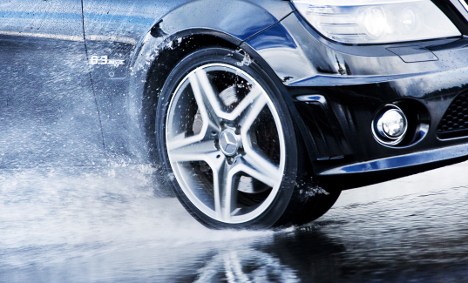 The researchers at Leipzig university are developing the world’s first-ever “intelligent” tyre which automatically adapts itself to the prevailing weather conditions even while you are driving.

A team of researchers headed by Detlef Riemer at the University of Applied Sciences in Leipzig unveiled the “adaptive tyre” at this year’s Hannover Fair, the world’s biggest industrial fair taking place in the north German city this week.

“Today’s choice of tyres are always a compromise between the ability to brake and petrol consumption,” Riemer said. “The car driver has to take into consideration every sort of weather condition and you can’t change tyres while you’re driving.”

But Riemer’s “adaptive tyre” is equipped with electronic sensors which recognise different sorts of terrain – whether motorway or dirt roads – and whether it’s dry, raining or snowing.

And accordingly, the tyres’ profiles are automatically raised or widened, even when the car is in motion. “That means your car is always equipped with the best possible tyre and noise and petrol consumption are automatically optimised, too,” Riemer enthused.

“The driver no longer has to think about adapting their tyres. The tyre itself ‘thinks’ too.”

The tyre is still a long way from a finished product and research is still ongoing, notably on the materials that can be used for the moveable parts of the tyre’s profiles.

“But we’ve patented it already, just in case,” Riemer said.