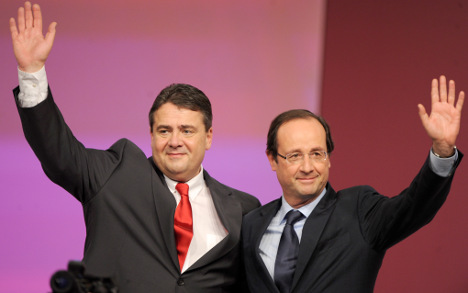 SPD leader Sigmar Gabriel said it was a sign of an alternative to the austerity politics of Sarkozy and Merkel.

Gabriel congratulated his French political ally Hollande on his “huge success” in beating the incumbent President Nicolas Sarkozy on Sunday.

The Socialist Party (PS) French candidate took over 28 percent of the vote, compared to Sarkozy’s 27 percent – the first time that an incumbent French president has been beaten in the first round of voting in 50 years.

Should Hollande defeat Sarkozy in the run-off on May 6, it would be the first time that the Socialist Party has held the French presidency since 1988.

Gabriel said such a success would show there was an alternative path out of the European currency crisis to the one marked out by Sarkozy and Chancellor Angela Merkel.

He said the Merkel-Sarkozy alliance had chosen a policy “which deals exclusively with making cuts, but does nothing for growth, and which lets speculators in the banks and at the stock markets get away scot-free.”

Instead, Gabriel suggested that Europe’s ailing economies needed a large-scale economic rebuilding programme, like the one the US implemented in Germany after World War II.

“If we tackle the growth and job market questions with something like a second Marshall Plan for southern Europe, then we have a big chance to get out of the European crisis,” Gabriel told German radio broadcaster Deutschlandfunk.

But Gabriel joined Merkel in expressing concern at the unexpected success of far-right candidate Marine Le Pen, who drew 18 percent in the first-round vote.

Merkel on Monday called the strong showing of the far right in the French election “alarming.”

“This high score is alarming but I expect it will be ironed out in the second round,” her deputy spokesman, Georg Streiter, told reporters at a regular government news conference, on the result of the anti-immigrant, anti-European National Front.

“The chancellor continues to support President Sarkozy,” he told reporters adding that she “will work together very well with any elected president of France”.

“The last decades have shown that the deep friendship between France and Germany is completely independent of the people in office and has a very fundamental contribution to the unification, strengthening and development of Europe,” he said.

German Foreign Minister Guido Westerwelle on Monday welcomed a French presidential run-off between “two proven democratic candidates” after a strong showing by the far right in the weekend poll. “Naturally we respect the electoral choice of the French citizens,” Westerwelle said in a written statement.