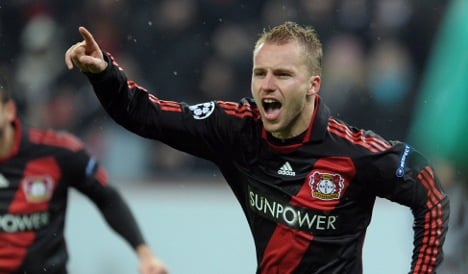 Michal Kadlec, 27, a defender for Leverkusen and a national player in the Czech Republic, had been in a disco in Cologne with a group of players from various teams when he was attacked.

“I was thunderstruck. The men identified themselves as FC fans, insulted me as a Leverkusen player and then I suddenly felt an impact,” Kadlec told the Express news portal.

“My nose immediately started bleeding heavily, and my girlfriend Nicole was shocked. I have never experienced anything like it, either in Cologne or in my homeland,” he said.

He had been celebrating Leverkusen’s 1-0 victory over Hoffenheim on Saturday evening, visiting the Cologne city centre disco Ivory with a group of teammates – and at least one FC Cologne footballer.

The Express reported on Monday that the 24-year-old man who had hit Kadlec, and his 20-year-old friend were members of the FC fan club Boyz Köln 200.

Kadlec was expecting to be operated on, on Monday, and said he intended to play in the upcoming match against Hannover next Saturday. “Despite this I hope to play against Hannover with a special mask,” he said.

Wolfgang Niersbach, head of the German Football Association, said he condemned the attack. “We were in contact with Cologne. But what can the club do? They are not fans, rather they are criminals, and must be treated as such.”

And although 1. FC Cologne manager Claus Horstmann apologised to Leverkusen, the latter’s spokesman Meinolf Sprink said, “FC Cologne cannot do anything about such excess.”