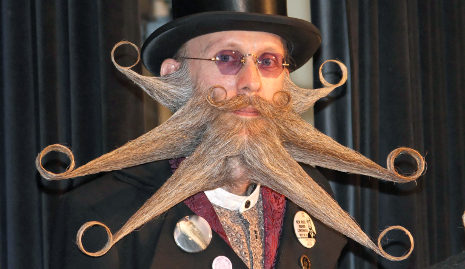 The competition was especially tough this year at the annual beard championships in Bad Schussenried in the German state of Baden-Württemberg over the weekend.

Competitors from the US, France, Austria, Switzerland and the Netherlands had travelled to Germany in the hope of being crowned beard champion.

Highest scores were given to Jens Müller from Pforzheim in Baden- Württemberg for his “trendy beard” and Lutz Giese from Berlin for his “Chinese chin beard.” Both were awarded 49.5 points out of a possible 50.

American Aarne Bielefeld won in the “freestyle full beard” category and Albert Schmid from Switzerland took home the prize for the best beard with a styled moustache.

Click here for a gallery of fabulous facial hair

The first German beard championship was held in 1987 and the competition has been steadily growing in popularity. Entrants must fulfill strict rules to compete, where the difference of a millimetre of hair can determine whether or not they qualify.

“In all categories unnatural or gaudy hair colours are not allowed,” said Stier. “Masks and make-up are also not permitted.”