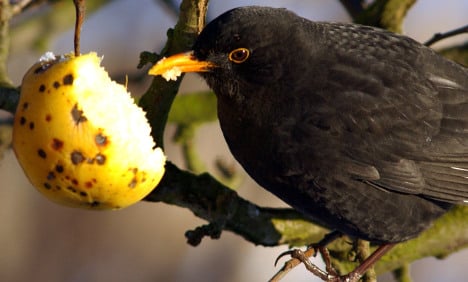 The Usutu virus was blamed for the deaths of many blackbirds last year, although it was only positively tested in 72 bird cadavers.

The Bernhard Nocht Institute for Tropical Medicine (BNI) in Hamburg called on Thursday for members of the public to keep their eyes open for dead blackbirds over the coming months and to report or even collect them.

Experts there are working with the bird charity Nature Conservation Union (NABU), the Community for Action Against Mosquito-Borne Diseases (KABS) and the University of Heidelberg to appeal for information and even dead birds when they are discovered.

Living birds infected with the virus will display ruffled plumage and abnormal behaviour.

“We have shown that the Usutu virus has overwintered in native mosquito species and therefore there is a possibility that blackbirds in Germany could again be infected early this summer,” said Norbert Becker, head researcher at the KABS.

The dead birds discovered so far this spring have been given the all-clear – none of the 25 cadavers sent in to the BNI tested positive for the virus.

NABU said a recurrence of the virus this year would depend on the weather and would show itself in blackbirds late in spring or summer. It could even be spread to neighbouring areas by the mosquito population.

The infection killed numerous birds last year, mostly in Baden-Württemberg and Rhineland-Palatinate. Scientists were alerted to the outbreak when reports of dead birds increased in these areas: 86 of the 223 birds tested were found to have the virus, of which 72 were blackbirds.

The virus can also in rare cases be spread to humans, where it causes fever, skin rashes and headaches and can in the worst cases even lead to encephalitis.

Anyone collecting a dead bird is advised to cover their hands with gloves or plastic bags and subsequently wash them thoroughly. Cadavers should be sent to a local vet, the BNI or the KABS.