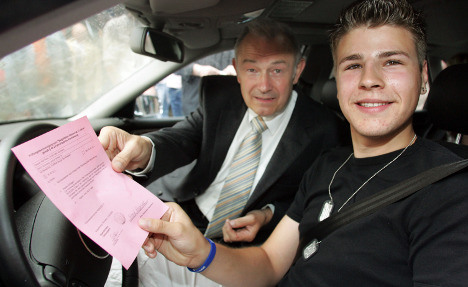 Current laws allow Germans to get behind the wheel when they are 17, but only with parental supervision until they hit 18, when they are allowed to drive alone.

But Peter Bleser, parliamentary state secretary in the Consumer Protection Ministry, said this was not fair, particularly for younger teenagers who live in rural areas.

He told the Saarbrücker Zeitung newspaper on Wednesday that young people living in the country often faced great difficulties travelling to apprenticeships due to the lack of public transport.

Allowing them to drive would also act as an incentive for young people to remain living in rural areas, he suggested.

Prospective early drivers will not only be stuck at slower than 80 kph, they will also have to get their parents’ permission, Bleser said.

Even so, such a change would have “fatal consequences” according to the UDV, the German Insurers’ Accident Research group. Drivers aged between 18 and 24 were already involved in more accidents than older people, and this would only get worse with younger drivers.

Driving at 16 is legal in some states of the USA as well as Canada and Australia. But European motorists are only allowed to take to the roads at such a young age in France, Sweden and Norway – and then only with parental supervision.

And not everyone is in favour of the move. The ADAC, the German motoring organisation, was quick to declare its opposition.

Spokesman Andreas Hölzel said, “This makes absolutely no sense,” and referred to statistics on the high accident rate among young drivers. “Individual motorists should not have to bear the brunt of local public transport problems,” he said.

Sven Rademacher, a spokesman for the German Road Safety Council, defended the current system of accompanied driving at 17, saying the government’s efforts would be better directed at improving the supervision system. “Multi-phase models like those already in use in other countries should be our focus,” he said.

The CDU is not the only party to have attracted controversy over a proposed change to age threshold laws. On Sunday, the Pirate Party called to reduce the voting age to 12 at a party meeting in Magdeburg. Germans have to be 18 to vote in all elections apart from municipal elections in six federal states where the age is 16.