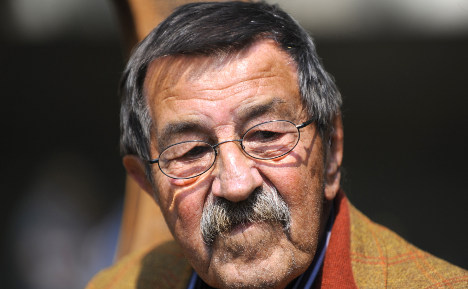 Grass, 84, a longtime leftist activist, is under observation in the Asklepios Klinik St. Georg, the city’s oldest hospital, the mass-circulation Bild reported.

The spokesman would not give details hinting at confidentiality issues.

Grass sparked outrage at home and abroad earlier this month when he published “What must be said” in a newspaper in which he said he feared a nuclear-armed Israel “could wipe out the Iranian people” with a “first strike.”

Commentators in Germany and Israel said Grass had offered up a one-sided portrayal of Israel as a bloodthirsty aggressor against Iran while dredging up anti-Jewish tropes in the nine-stanza prose-poem.

“The shameful comparison that Günter Grass made between Israel and Iran, a regime which denies the Holocaust and calls for Israel’s destruction, says very little about Israel and a great deal about Mr. Grass,” Israeli Prime Minister Benjamin Netanyahu said in a statement.

Israel, the sole if undeclared nuclear power in the Middle East, has said it is keeping all options open for responding to Iran’s nuclear programme which it says is aimed at securing atomic weapons, posing an existential threat to the Jewish state.

It also barred Grass from visiting the country, declaring him persona non grata.

Iran, whose President Mahmoud Ahmadinejad has repeatedly questioned Israel’s right to exist, has denied that its sensitive nuclear work is aimed at making weapons.