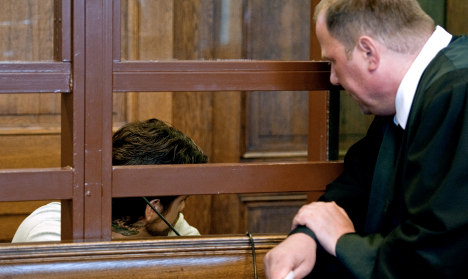 The 30-year-old New Yorker identified only as James B., had only been living in Berlin for about six months when he got into a drunken argument with an Austrian tattooist.

“He first hit the man straight in the face with an axe, damaging his skull and cutting through his nose and mouth,” Tobias Kaehne, spokesman for the Berlin District Court, told The Local.

“Because he killed him with particular savagery, the usual sentencing limit of 15 years for murder could be extended to life.”

Forensic detectives found at least 52 injuries on the Austrian Raoul Schmidhuber’s body, after it had been recovered in pieces from the Spree River and the Schäfer Lake in and around the German capital. The cause of death was drowning – in his own blood.

The first parts – wrapped in plastic bags and weighed down with training weights – were found just a day after the killing, floating in the river in the Kreuzberg district of Berlin. Over the following week the rest of the body was found, with the head the last to be recovered from the lake.

“The victim was covered in tattoos so it was easy to identify him – and he had been reported missing too,” said Kaehne.

Police then received an anonymous tip that Schmidhuber had been seen with the American the day before he went missing.

Officers questioning James B. said he admitted having killed the man, but did not elaborate on why they had argued.

He also admitted the killing in court on Monday, Kaehne said.

The judge dismissed charges against the American’s German girlfriend for trying to hinder the hunt for her man. She was also to some extent a victim of her boyfriend, said Kaehne.

She had left her flat when the two men were arguing, only to find the dismembered body on the floor when she returned, and terrified for her own safety, had then helped to dispose of the head, he said.

She had already spent more than five months in investigative custody, and the court said she could go free if she paid €1,000 to a charity.