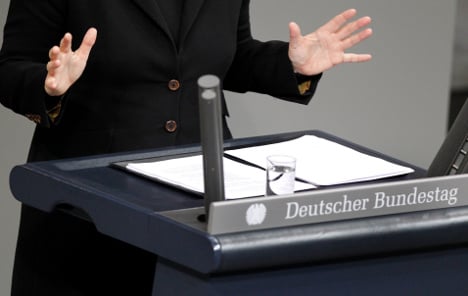 The new rules would require the parliamentary president – equivalent to the speaker in the British House of Commons or the US House of Representatives – to agree a list of those taking part in a debate with the various faction leaders in advance.

The rule changes would also limit the president’s powers to allow individual members to speak.

Those in favour of the changes believe they will cut down on drawn-out, repetitive debates, but others, including some MPs of the parties suggesting the move, think it breaches freedom of speech laws.

The rule changes would also hedge the so-called “right to justify a decision.” Under this rule, all MPs are entitled to speak to the chamber for five minutes to explain why they are voting for or against a new bill – a right often used by party rebels.

Instead, MPs will only be allowed to submit a written statement saying what they disagree with and why, and will only be granted the right to speak to the Bundestag under certain circumstances.

The proposals have been drawn up by Chancellor Angela Merkel’s Christian Democrats, the Christian Social Union, the Social Democrats, and the Free Democrats. Only the Green Party and the socialist Left party have said they will vote against the changes, to be approved on April 26.

“Being able to stand up and put forward a different opinion to the ruling party is one of the basic rights in German parliament,” the German parliament’s Vice President Katrin Göring-Eckardt, of the Green Party, told the Berliner Zeitung newspaper on Monday.

A second Vice President, Hermann Otto of the FDP – the junior coalition party to Merkel’s conservatives – agreed with Göring-Eckardt, saying, “I see no real reason for changing how we operate.”

CSU leader Horst Seehofer – whose parliamentary faction is in favour of the change – told the Bild newspaper on Monday that imposing limits on the freedom of speech could “disable parliament.”

He added that the recent success of the Pirate Party shows how the established parties should think about changing their approach. “We need a more direct democracy.”

MPs are now threatening legal action in the constitutional court.