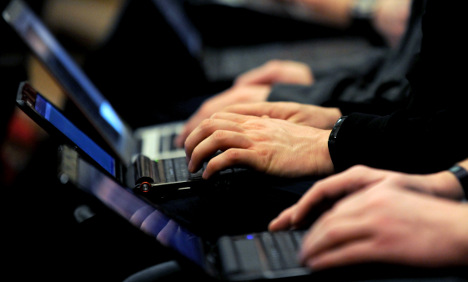 Prolific hackers affiliated with the Anonymous group have been waging an unrelenting campaign against right wing websites dubbed ‘Operation Blitzkrieg’. They have breached servers belonging to the extreme right National Democratic Party (NPD) and the illegal Blood and Honour group, leaking personal details of thousands of members.

And despite threats from the right, their campaign will continue, as they remain unfazed by a recent spate of arrests targeting hackers.

“Operation Blitzkrieg is designed to be a long-term op,” their anonymous spokesperson explained. “As long as the Nazis are present in the interwebs we will fight against them.

“The campaign in the internet is important. It’s also relevant that the people go on the street and demonstrate against them,” the spokesperson said.

Using Twitter to keep their fans updated, the Operation Blitzkrieg hackers openly boast of their exploits and post leaked files from their ‘Nazi leaks’ on their website.

One major leak has included the personal details of hundreds of customers of the infamous Thor Steinar brand, which recently attempted to open a controversial new ‘Brevik’ store in Chemnitz.

“We were surprised after the release of Nazi-leaks that there were so many “famous” people who purchased in the Nazi shops,” the spokesman said.

“So we release the dumps and the global community check the lists; thousands eyes are better than just a few.”

’Important to know your enemy’

“We check the Data packages before we release them. It’s very important that you know who your enemy is… You as a citizen need to know that information,” the spokesman added.

The group has been carrying out regular attacks, posting frequent dumps of stolen information and taking down a different far right website each Friday.

“We celebrate every Friday the #fucknazifriday we hijack the servers of the nazis, leak their databases and deface their pages with some lulz.”

Price on their heads

This has annoyed the far-right so much that messages have been posted on the right-wing Altermedia site offering a reward for any information about the identity of the hackers.

The hackers say they are now operating across several European countries as well as Brazil and are still building their hacking network, although German websites remain their primary targets.

Operation Blitzkrieg leaks have revealed links between the Britain’s BNP and US extremists, who praised Nick Griffin as the ‘greatest white activist in the world’.

Hackers also released copies of voicemails and emails between white nationalist groups and US Presidential candidate Ron Paul’s campaign staff. The group says there are more revelations to come.

“Operation Blitzkrieg was founded in February 2011 and went public in May. We have access to many fascist email accounts we haven’t released yet,” the spokesman said.

“For a while we will gather that data and when we have what we want, we will release it for the public. Expect us!

“Fascist Parties are all over the world. The focus is everywhere. Guys from Sweden, Finland, Brazil and France also work within this operation.”

Operation Blitzkrieg is the latest in a long line of hacking campaigns carried out under the Anonymous banner that have previously seen disparate targets like the CIA and Syrian government targeted.

Hacktivists are believed to be responsible for over half the data stolen online in 2011 according to a report released by Verizon working alongside the United States Secret Service.

Yet despite their prolific hacking they remain confident they will not have their identities revealed like the hacking group Lulzsec, whose leader Sabu recently came out as an FBI informant.

“The goal is not to get busted at all.”

“We’re sure that they all are keen to fuck us, so we take care. Furthermore Sabu may have been leader of some, but not of us.

“We are all security experts and know what we have to do to be anonymous in the internet. There are a few rules you have to follow and you are a ghost. We live in the interwebs. They are just using it.”