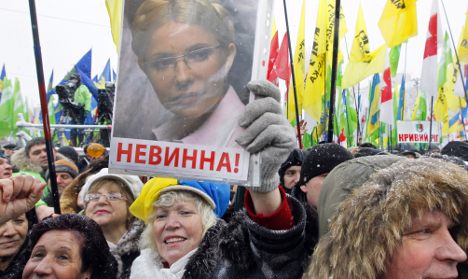 The chances of her being brought to Berlin for medical treatment for severe back problems would appear slim, despite the recommendation of a doctor at the Charité hospital who visited her.

Markus Löning told reporters after returning to Berlin that the jail sentences imposed on Tymoshenko and former interior minister Yuriy Lutsenko smacked of a “major settling of scores with ex-members of the government”.

Löning called their imprisonment “unacceptable and inhumane”, accused Ukrainian authorities of withholding key medical information and treatment from them, and urged their immediate release.

He said he had met during his three-day stay with Tymoshenko’s daughter, relatives of the convicted former environment minister Georgiy Filipchuk and Lutsenko, who he said had long not been told he had hepatitis and was denied treatment.

He also spoke with former defence minister Valeriy Ivashchenko, who Thursday became the third minister in the pro-Western cabinet of Tymoshenko to be jailed in the two years since her presidential rival Viktor Yanukovych took office.

Ivashchenko was sentenced to five years in prison on abuse of office charges, which Löning called “fabricated allegations”.

Tymoshenko has condemned the convictions as part of a vendetta by the new government against her and her allies. The cases have also stalled the ex-Soviet republic’s drive to one day join the European Union.

The former Orange Revolution leader Tymoshenko herself was sentenced to seven years in jail in October for signing a 2009 natural gas agreement with Russia that allegedly cost Ukraine about $200 million.

Prosecutors have since extended the charge sheet against her to include alleged earlier crimes and she faces a new trial for embezzlement and tax fraud next week.