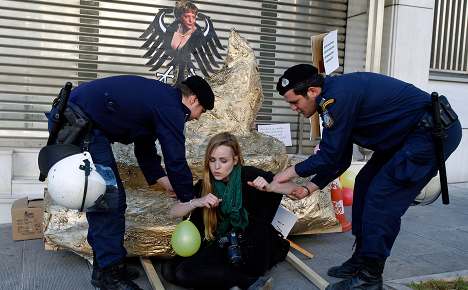 The protesters, members of a political-artistic collective, topped their offering off with a huge photo of the German national emblem – the eagle – that had the head of Chancellor Angela Merkel and very large breasts.

The model was a lifelike replica of a curled turd- several feet tall and covered in gold paper.

Three photographers were also briefly detained at the demonstration.

The Germans’ protest was directed against what they said was Berlin’s “neoliberal EU policy”. In a statement published before the arrest they denounced Germany’s role in enforcing strict spending rules on struggling Greece.