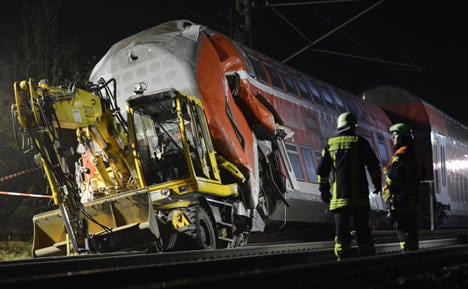 The accident happened on the Frankfurt-Hanau line, where an engine loaded with two diggers “was standing on the same railway line that the train was travelling along,” a police spokesman said.

The two vehicles hurtled straight into each other at around 1:00 am, near the town of Mülheim am Main, before the passenger train which had 35 people onboard, fell on its side.

The driver and two men working on the train line were killed in the crash and a further six were sent to hospital with serious injuries, police confirmed in a statement early Friday morning. The cause of the crash remains unknown, police said.

But investigators are looking into whether the diggers, which can be driven on rail tracks as well as roadways, arrived too early at the site or whether they were on the wrong track, said Reza Ahmari, a spokesman for the federal police in Koblenz said.

The three killed were believed to have died on the spot, he said. It was not clear how fast the train was travelling, but speeds up to 140 kilometres per hour are allowed, according to the federal railway.

The investigation is expected to take some days. “This is a very complex investigation,” Ahmari said. A railroad official said that train “was on the exactly prescribed track.”

Over 200 people were sent to the scene to pull out victims. It took several hours to cut the driver’s body free from the front of the train, which was completely destroyed.

The line, which is popular with commuters, has been closed and an investigation and clean-up operation remain underway, the spokesman said. The S-Bahn which runs on a different track is running, officials said.