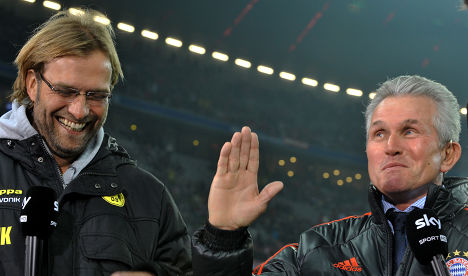 “We remain in the lead, but we won be celebrating,” insisted Klopp, whose team face Schalke, Mönchengladbach, bottom side Kaiserslautern and Freiburg on their league run in.

“I am 99 percent sure that Dortmund will be German champions,” he admitted.

After Dortmund secured their fourth straight victory over Bayern, only a disaster will prevent Borussia celebrating another German league title when the season finishes on May 5.

Lewandowski’s 77th-minute winner at Dortmund’s Signal Iduna Park stadium was his 20th goal of the season, but there was drama in the dying stages as Bayern’s Arjen Robben had a penalty saved four minutes from time.

The Dutch star then took a clear shot at the goal, while at the other end, Lewandowski hit the crossbar just before the final whistle.

“That was thrilling at the end, the last few minutes were unbelievable,” said Klopp. “Hats off to my team, you can’t play much better than that.

“I think the victory was highly deserved, I am very happy. Now the next step is against our friends in Gelsenkirchen.”

It was Dortmund’s 24th consecutive game without defeat – their last Bundesliga loss coming last September against Hanover – and Dortmund’s fourth straight win over the Bavarians, who will meet them again in the German Cup final on May 12.

“That was a big win for us, but a lot can happen in the next four games,” said Dortmund defender Neven Subotic.

And his captain Roman Weidenfeller, whose late penalty save denied Robben, echoed his defender’s cautious comment.

“It was a nice feeling to have saved the penalty, but now we have another match coming up and we have to look from game to game,” he said. “We put in a great performance and we can all be very, very happy.”

Bayern coach Jupp Heynckes must now rebuild his players’ morale quickly as they face Real Madrid next Tuesday in the Champions League semi-final, first-leg, and before that host Mainz on Saturday in the Bundesliga.

“The first half went to Borussia Dortmund, but after the break, the tide turned,” said Heynckes.

“Arjen Robben then had two great opportunities to put us level, but things like that happen in football.

“Dortmund hold all the cards now.”