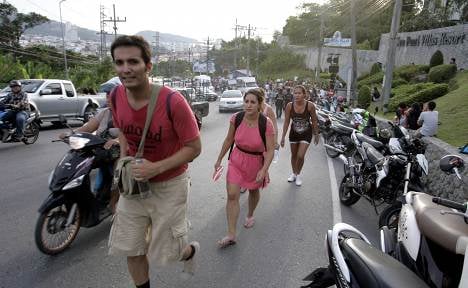 Warning systems and evacuation procedures have been in place in many countries after the 2004 tsunami devastated thousands of kilometres of Indian Ocean coastline and killed at least 230,000 people of all nationalities.

These systems were put into action on Wednesday when an undersea earthquake measuring of a magnitude of 8.6 was reported off the Sumatra coast.

“The hotels in holiday areas like Phuket and Khao Lak which are directly on the beach brought their guests to higher terrain,” said holiday firm Tui’s head tour operator Ralf Rau in Bangkok.

He said around 2,800 Germans were on holiday in the region with his firm. “The crisis team was immediately alerted and we are in constant contact with our people in the affected area. The message is clear – the alarm systems work,” a spokeswoman added.

Thomas Cook has several hundred guests in the Phuket region and around 300 on Sri Lanka. A spokesman said, “the warning system put into place after the 2004 tsunami worked well.” The evacuation of tourists from low-lying to safer areas had gone smoothly.

“I was sitting in front of my computer… then I suddenly thought somehow everything here was shifting, it was all moving. Very strange, I had never experienced it before. Then I looked out of the window and saw how the electricity cables were moving. Then I knew – it was an earthquake.

“I checked immediately on the internet. One is well-trained after the last experience. I knew immediately and saw on the map that it was a dangerous situation for us.”

She said she summoned all the divers who were on the beach and got them to safety before calling the dive tour ship and telling the captain to make sure he was over deep water. “We know from experience in the last tsunami that the waves run in deep water and not on the surface. You have to go out with the ship into deeper water and wait for an all-clear,” said Hinrichs.

It seemed that although the underwater earthquake was strong, because its main force was horizontal, it did not generate a large tsunami wave.