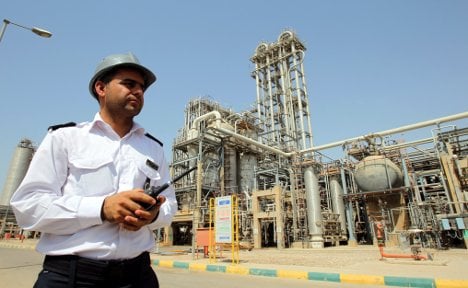 “Iran has ceased its (oil) exports to Germany, after a identical measure concerning France and Britain, and it is projected that exports to Italy will also be halted,” Iran’s Arab-language network Al-Alam reported.

The two channels on Tuesday reported that Iran had cut oil exports to Spain. But Spain’s foreign ministry responded by saying that Madrid had ended purchases of Iranian oil more than a month ago, at the end of February.

Iran’s oil ministry also announced on Tuesday that no more oil was being sold to Greece.

Al-Alam and Press TV also reported that import bans had been slapped on products from 100 European companies. Neither the companies nor the sources for that information were identified.

Iran is angry at the EU embargo on its oil announced in January and due to take full effect on July 1.

In February, Tehran announced it had stopped oil exports to France and Britain in a largely symbolic gesture because those two EU countries only bought negligible amounts of Iranian crude.

Other EU nations – notably Italy, Spain and Greece – were big consumers of Iranian oil, however.

But they have been sharply reducing their Iranian imports in recent months, sourcing extra crude instead from other suppliers such as Russia and Saudi Arabia.

Last year, EU nations collectively imported around 450,000 barrels per day of Iranian oil. That is believed to have been sharply reduced since the announcement of the embargo on Iran.

The Islamic republic is the second-biggest producer in OPEC, exporting some 2.5 million barrels per day, which for all of last year earned it $100 billion in revenues.

EU countries are imposing the oil embargo as part of a raft of US-led sanctions targeting Iran’s economy to put pressure on it to rein in its nuclear programme.

Much of the West believes the programme masks a drive to develop a nuclear weapons capability. Tehran denies any such ambition.

President Mahmoud Ahmadinejad on Tuesday said Iran was able to survive for up to three years without selling any oil.

“We have enough foreign currency so that, even if one barrel of oil is not sold for two or even three years, the country will be managed well and the enemies will not see their wishes (come true),” he said in a televised speech.

The announced stoppages of oil exports to EU countries come ahead of crucial talks in Istanbul on Saturday between Iran and the major powers.