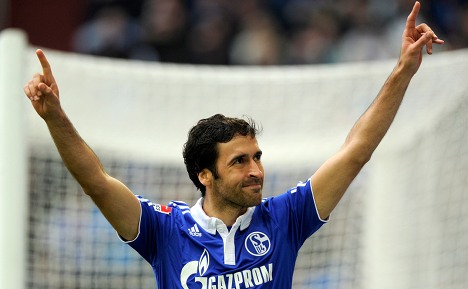 Raul scored early on in both halves, beating Hanover and bringing his goal tally up to 14 this season. The third goal came from top scorer, Dutchman Jan-Klaas Huntelaar just after the hour mark.

The win is a relief for Ruhr valley-based Schalke, as they were booted out of the Europa League last week after being beaten by Athletic Bilbao.

Raul, a three-time European Cup winner with Real Madrid, scored in both legs of the tie against the Basque outfit but could not prevent a 6-4 aggregate loss.

Sunday’s win, however, opened up a five-point lead over Borussia Monchengladbach, who stayed fourth after they could only draw at home to relegation-haunted Hertha Berlin.

In Sunday’s late game, 1983 European champions Hamburg, who are just a point clear of the drop zone, are looking to ease their relegation fears by beating mid-table Bayer Leverkusen.

Elsewhere, Borussia Dortmund won with goals from Robert Lewandowski and another from Ilkay Gundogan.

“We can now travel to Dortmund feeling optimistic and motivated, even if that game itself won’t decide the title race,” said Heynckes.

“We’re really looking forward to the Bayern game – we want to offer a real spectacle for 80,000 fans, but (the game) won’t decide anything,” Klopp added.