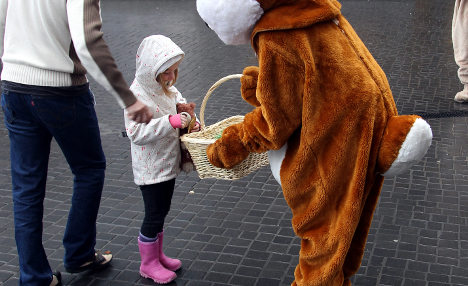 “When all their playmates in the kindergarten are happy and waiting for the Easter Bunny, it would certainly be a shame for a child to hear at home that it doesn’t exist,” German psychologist Ute Bayen told Die Welt newspaper.

She said childish excitement and enthusiasm should not be dampened.

And Jacqueline Woolley from the University of Texas in Austin even went further, saying it was good for a child’s development.

“The childish belief in fantasy figures is definitely good for cognitive development,” she said.

“It fuels the fantasy and allows children to consider possibilities that do not exist in the real world.”

But parents must be careful about disappointing their children when they realise that there is actually no Easter Bunny.

“The trusting relationship is put at risk,” said Bayen. “Children can be disappointed when it becomes clear they were being lied to.”

Parents should try to be sensitive about such topics – and perhaps best support critical questions when the children ask about for example, whether a rabbit could really carry such big eggs.

Woolley suggests that such a moment should be used to turn the situation around and ask the child what they believe. She said the idea of an Easter Bunny is usually quietly discarded without much fuss.

Gerd Lehmkuhl, child psychologist at Cologne University Hospital said such belief generally fades thanks to doubts expressed among children’s friends. “Children realise that it doesn’t exist, but still hope that it will come and bring them eggs,” he told Die Welt