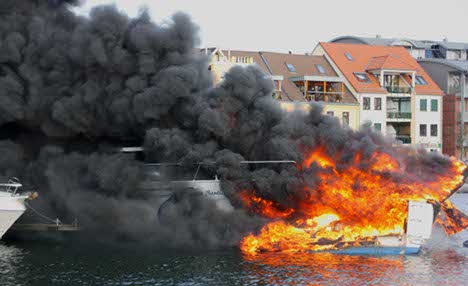 The boat was moored in the town of Waren, Mecklenburg Western-Pomerania, when it exploded late on Friday afternoon. It rammed into another smaller boat that also caught fire and sank.

The three tourists who had rented the boat had luckily got off shortly before the explosion.

The force of the blast threw a 17-year-old on a nearby boat onto a table, causing light injuries. No others were hurt.

Police estimated total damages to be around €250,000 in a statement released on Saturday morning. And as of yet, they do not know what caused the blast but an investigation is underway.

A clean-up operation began on Saturday morning, as local police reported that the water was covered in soot from the fire and the area smelled strongly of petrol.

Despite efforts from the clean-up team, local river authorities are concerned that part of the smaller boat left underwater could cause an oil leak.