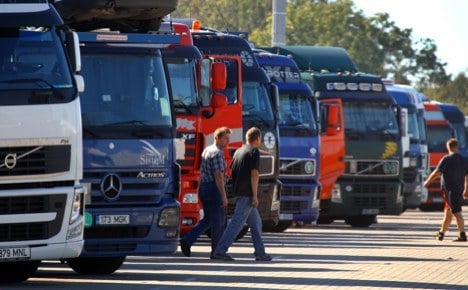 According to a number of regional police authorities, more and more thieves are sneaking into car parks at night and siphoning off fuel.

A gang reportedly broke into the tanks of four trucks in the small town of Hamelin on the night of March 31, and stole 1,450 litres of diesel, worth €2,200. The Pied Petrol Pipers of Hamelin took advantage of the dark car park near a remote freight train station on a Saturday night, when all the workers had long gone home.

Since the start of the year, incidents of fuel theft have risen by 11 percent in Lower Saxony, six percent in Bavaria, 25 percent in the northern state of Mecklenburg Western-Pomerania, and a whopping 33 percent in Brandenburg.

The robbers’ main targets are large trucks, whose tanks contain up to 1,000 litres of fuel.

“The perpetrators come with a large van, for example, which has a huge tank built into its back,” said Claws Tohsche, spokesman for Daimler, the large truck builders in the world.

The cap is ripped off by force, or a hole is drilled into the tank. It is then emptied with a small electric pump and a length of tube. Many trucks only have plastic tanks, to cut costs and save weight, which are much easier to break into than expensive steel tanks.

Companies hit be the theft often face extra costs through repairs and unplanned halts in their timetables.

There has also been an increase in the amount of tank security technology on the market, as entrepreneurs spot a market opportunity. These include an alarm that goes off if the level in the tank drops when the ignition is not on.