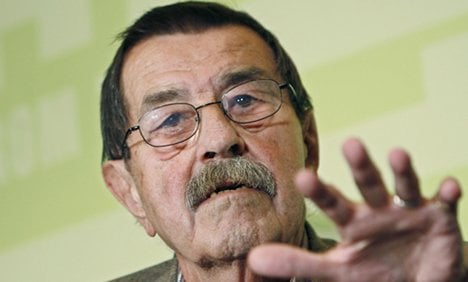 The 84-year-old long-time leftist activist wrote in, “What must be said” that he was worried Israel “could wipe out the Iranian people” with a “first strike” due to the threat it sees in Tehran’s disputed nuclear programme.

“Why do I only say now, aged and with my last ink: the atomic power Israel is endangering the already fragile world peace?” reads the poem, which was published in the daily Süddeutsche Zeitung.

Grass answers that Nazi Germany’s “incomparable” crimes against Jews and fears of accusations of anti-Semitism kept him from openly criticising Israel.

But now, “tomorrow could already be too late” and Germany could be a “supplier to a crime,” referring to a deal sealed last month for Berlin to sell Israel a sixth nuclear-capable Dolphin-class submarine.

“I admit: I will be silent no longer, because I am sick of the hypocrisy of the West.”

Grass, author of the renowned anti-war novel “The Tin Drum” and a vocal critic of successive post-war German governments, sparked outrage in 2006 when

he revealed, six decades after World War II, that he had been a member of the

Such is Grass’s status in German cultural life that Angela Merkel’s spokesman Steffen Seibert was asked about his criticism of the submarine sales to Israel at a regular government press conference.

“In Germany, the freedom of artistic expression applies, as, fortunately, does the freedom of the government not to comment on every work of art,” Seibert said.

Henryk M. Broder, a prominent German Jewish columnist, accused Grass in light of his poem of being “the prototype of the educated anti-Semite.”

“Grass has always had a problem with Jews but he has never articulated it as clearly as with this ‘poem’,” Broder wrote in the daily Die Welt.

Israel has said it is keeping all options open for responding to Iran’s nuclear programme, which it says is aimed at securing nuclear weapons, posing an existential threat to the Jewish state.

Iranian president Mahmoud Ahmadinejad frequently questions Israel’s right to exist and has repeatedly denied that its nuclear programme is aimed at making weapons.