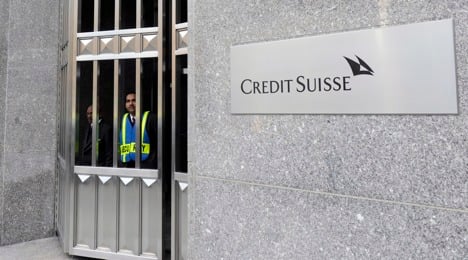 Swiss financial paper Börsen-Zeitung first reported the travel ban without naming sources, but Crédit Suisse denied the report, saying that it was based on an email sent by mistake.

The bank first ordered a travel ban on its employees in spring 2010, when revelations about a secret CD containing bank details of German tax evaders keeping money in Swiss banks first surfaced.

Some German politicians have said it is plausible that the bank has re-introduced a travel ban.

“This is good news,” Green Party financial spokesman Gerhard Schick told business daily newspaper Handelsblatt. “Crédit Suisse can do its honest business through its German branches. But if the Swiss headquarters are sending advisers abroad, it’s a sign it is deliberately not using this structure.”

German tax authorities from the state of North Rhine-Westphalia defended their officials, saying they had done their duty.

In a separate development, Germany’s Bild daily, the most-read newspaper in Europe, said Wednesday it had filed a lawsuit against a Swiss minister amid a simmering tax evasion row between the two neighbours.

Enraged by Switzerland’s threat, the paper filed a suit against Justice Minister

The Swiss authorities have taken aim at German tax officials “who were just doing their job,” Bild said, also criticising Switzerland for “standing by for decades as tax evaders stash away millions in their country.”

A proposal to assuage the row by forming a new tax agreement with Switzerland was dismissed by opposition leader Sigmar Gabriel of the centre-left Social Democrats.

“That sends a signal that the state can be bought,” he told the WAZ media group. “That’s a slap in the face to the taxpayer and the rule of law.”

The proposal would allow secret income that Germans keep in Switzerland to be taxed retrospectively – but without punishing the tax evaders.

On Tuesday, German Finance Minister Wolfgang Schäuble called this a “sensible, respectful” solution, but the opposition says this simply lets evaders off.