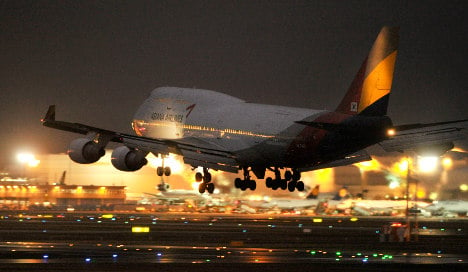 The administrative court in Leipzig upheld a provisional ban, originally imposed by another court last October, on all take-offs and landings between 11 pm and 5 am following complaints by local residents.

A total of 17 flights are affected by the ban, but the court also ordered the regional authorities of the state of Hesse, where Frankfurt is situated, to re-examine a further 133 take-offs and landings between 10-11 pm and 5 – 6 am with regard to noise.

Night flights are only permitted in cases where airlines and the airport authorities can prove there is a special need.

Lufthansa Cargo, the freight division of Germany’s leading airline, has estimated that a night flight ban will cost it €40 million in earnings each year.

Lufthansa shares were showing a loss of 4.41 percent at €10.08 on the Frankfurt stock exchange just after midday, in a generally lower market.

The ruling “threatens to clip the wings of Frankfurt, of Hesse and of Germany as an export and logistics nation,” raged Lufthansa chief executive Christoph Franz.

“It deals a heavy blow to Germany as a place to do business and there is no doubt that of Europe’s biggest hubs will fall back in international competition,” Franz said.

Klaus-Peter Siegloch, head of the BDL air industry federation, complained that, following a series of other measures recently including an air traffic tax, the night flight ban was “a further step that will impede the competitiveness of German airlines and airports versus their international rivals.”

There were no such bans in Amsterdam, Paris, London or Dubai, Siegloch said.

“It’s becoming ever more difficult for German airlines and airports to be economically successful.”

The tourist industry association DRV suggested that not only freight companies, but tourists and air-travellers, too, would be hit by the night flight ban.

“German airlines need take-offs and landings at flexible times and during the night if they aren’t going to be at a disadvantage internationally,” said DRV chief Jürgen Büchy, suggesting that airlines would be compelled to raise their ticket prices.

“Bans are not the adequate means to meet residents’ demands for a peaceful night’s sleep,” Büchy said, pointing out that for decades airports have been investing in noise reduction and protection measures.

Jörg Reuter, a member of one of the numerous residents’ campaign groups, hailed the ruling as a “victory” which could set a legal precedent for other airports in Germany.

“A balance has to be struck between the interests of local residents and the economy,” he said.