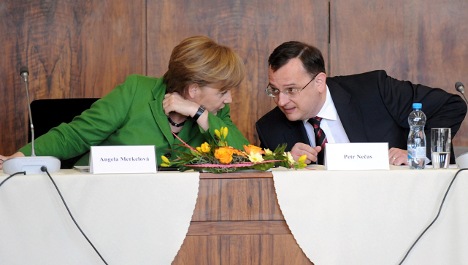 “There is no pressure … the most important thing is that the Czech government stands by the objectives of the pact,” Merkel said after meeting Czech Prime Minister Petr Necas in Prague.

“We follow very similar paths when it comes to the economic and financial policies,” she added.

The fiscal pact, which was written in response to the eurozone debt crisis, forces countries to enshrine in national law a so-called “golden rule” to balance budgets – or face automatic sanctions.

Necas said his country would meet rules for eurozone members, with its public deficit projected at 3.0 percent of gross domestic product for 2013, down from 3.5 percent for 2012 and 3.7 percent in 2011.

“Our government debt stands at 41 percent (of GDP), which means we are safely under the Maastricht (EU treaty) level” of 60 percent, he added.

The Czech Republic, an ex-communist country of 10.5 million people, is obliged to join the euro under the terms of its 2004 EU entry deal but there is no deadline for the move and Prague says it is not planning to join in the near future, given the eurozone debt crisis.

Necas’s right-wing Civic Democrats, the strongest party in the Czech three-party governing coalition, are particularly opposed to the fiscal compact, agreed earlier this year as part of wider efforts to tame the crisis.

Necas has attacked it for failing to clearly set a 60-percent ceiling for government debt and to ensure participation at eurozone meetings for EU countries still using their own currency.

On Tuesday, he said his country, heavily dependent on car exports, wanted a stable eurozone because of its strong economic ties with the 17-member group.

“One-third of our exports head for Germany, so any efforts at a stable eurozone are in our interest,” he said.

Merkel said the Czech Republic was likely to act as “a great example” of a country that plays by the rules, which it takes “very seriously.”

“Maybe the Czech Republic will sign later,” she added.