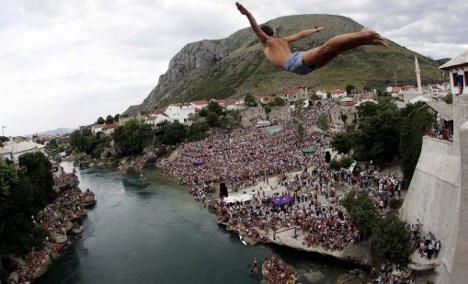 “2012 can be the year when Bosnia-Hercegovina makes decisive strides towards both membership of the EU and NATO,” German Foreign Minister Guido Westerwelle and his British counterpart William Hague wrote in a joint column published in leading Bosnian newspapers.

“Bosnia-Hercegovina’s political leaders have created a moment of opportunity and we urge them to seize it. We will do all we can to support them,” they stressed.

The implementation of Brussels-sought reforms has been slowing down since 2006 due to political infighting. It reached a practical standstill after elections in October 2010 when the parties squabbled for 16 months before finally agreeing on forming a central government in February.

Since the end of the 1992-1995 war Bosnia has been split into two entities – the Muslim-Croat Federation and the Serbs’ Republika Srpska – linked by weak central institutions.

Westerwelle and Hague said Bosnia could seek to obtain EU candidate status this year – if it continued with the necessary reforms.

To be able to apply for European Union candidate status, Bosnia would notably have to prove that it had launched a credible process to amend its constitution that currently reserves certain elected posts only to members of the main ethnic communities – Muslims, Serbs and Croats.

The European Court of Human Rights has labelled this provision discriminatory against Jews and Roma.

Bosnia is the only Western Balkan country that has not even applied for EU candidate status.