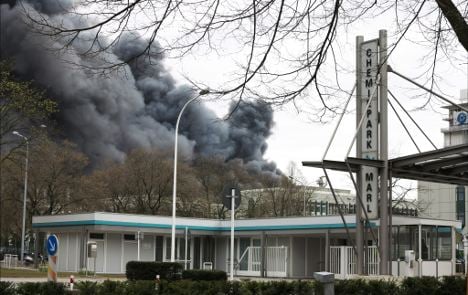 “We deeply regret to say that after the fire at the chemical park in the CDT plant in Marl on March 31, 2012, a second staff member has died,” Infracor Chemistry Services said in a statement.

“He had been flown out to a special clinic with severe burns.” Police said he was a 31-year-old man.

The explosion of a tank Saturday at the plant in the western town of Marl sent black smoke billowing overhead, and residents were warned to stay indoors with their windows and doors closed. It took 15 hours to extinguish the fire.

One 45-year-old employee was killed immediately and the injured man was evacuated. Officials had said Saturday his life was no longer in danger.

A third person suffered only slight injuries and was quickly discharged.

CDT or cyclododecatriene, the substance contained in the tank that blew up, is used in the production of plastic parts in the auto industry, as well as in cosmetics and electronics.

It was still not immediately clear what had caused the blast. Marl, a town of 87,000 in the Ruhr industrial heartland, some 40 kilometres (25 miles) from Dortmund, is a key chemical industry centre.