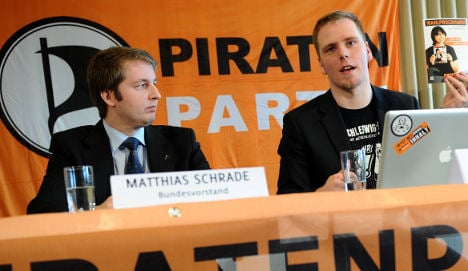 In a strong performance in the Saarland state election last month, the Pirates garnered more than seven percent of the vote, clearly pulling away from the once breakthrough Greens at five percent.

The result will give the Pirates four seats in the Saarland parliament to the Greens’ two.

The success seems to have given them a national boost. In a national survey conducted by pollsters Emnid for Sunday’s Bild am Sonntag newspaper, the Pirates stood at nine percent, two percent up on figures from a week previously.

A similar poll published last week suggested that 24 percent of Germans would support the idea of the Pirates forming part of the next national government.

The Pirates remain behind but are gaining on the Greens, who were on 13 percent, down by two percent on a week ago.

They are taking the Pirates seriously, said Renate Künast, head of the Green parliamentary party.

“I see no reason to speculate that the Pirates will disappear,” she told Bild am Sonntag. “We are well-advised to assume the Pirates are here to stay. We take them seriously.”

The centre-left Social Democratic Party dropped one percent compared with a week before, to 27 percent, while Angela Merkel’s conservative Christian Democratic Union was up by two percent on 36 percent.

Her coalition partner, the business-friendly Free Democratic Party was at four percent, still unable to clear the five-percent hurdle which parties must exceed to get any parliamentary representation.

The socialist Left party were on seven percent, well set to send MPs to parliament again.

The next national election will be held in the autumn of 2013.