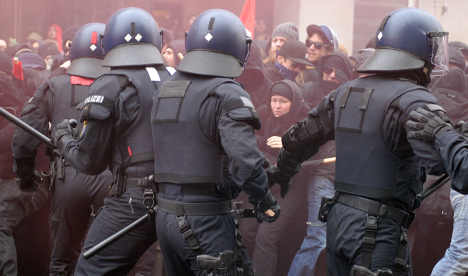 Violence broke out after police moved in with pepper spray and batons to break up the demonstration, which organisers said was part of a European day of “action against capitalism.”

One policeman was taken into intensive care with serious injuries after having been pelted with stones.

Police said around 4300 protestors gathered for the march through Frankfurt city centre on Saturday, with organisers putting the number at 6000. The planned route had been to march from the main train station to the construction site of the new European Central bank building.

However, police said they moved in to break up the demo after the protestors turned nasty. About half way along the route, police said they stopped the march and arrested more than 100 demonstrators for “serious crimes.”

Later, after the march had been dispersed, smaller groups of demonstrators continued to throw paving stones, fireworks and bottles at office and retail buildings, said police.

Demonstrators spoke of “kettling and harassment”. More than 200 protesters were held in one area in a kettling tactic by police for over six hours on one street.

“Lots of people have suffered bruising, there’s at least one confirmed fracture and many people suffered from the effects of teargas used by the police,” said one spokesman for the protest.

The protest was organised by an alliance of 200 left wing groups nationwide, under the name “M31” (March 31st). Demonstrations against EU austerity measures under this name were held in more than 40 European cities on Saturday.

“We don’t want to save capitalism, but overcome it,” said a spokesman of the Free Workers Union (FAU) primary trade union organisation.