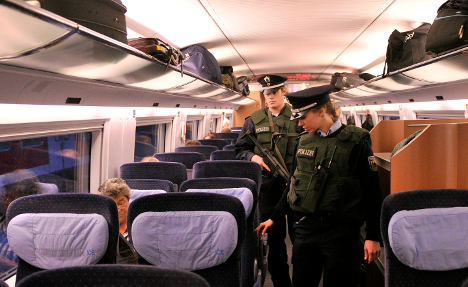 Speaking to The Local, the 25-year-old student said he was disappointed by the verdict which has provoked a storm of outrage. One human rights lawyer called for the judge to be dismissed, while his own lawyer says he will take the case to the Constitutional Court if necessary.

“I don’t want to believe it – that my country now supports this, it is terrible,” the student said.

“The police have been told they can do this – no-one is thinking of the person getting hurt. I just wish every kind of racism would stop; it is horrid how people are treated by those who think they are lesser.”

The student, who asked not to be identified, said he often took the train from Kassel, where he studies, to visit family in Frankfurt.

“Over the last three years I have been asked for my identification about 15 times on that train,” he said. “It was making me sick.”

The check in question came on December 3, 2010, on the train he had taken so many times before.

“I had got myself a cup of tea and was returning to my seat when my way was blocked by the two police officers who asked me where I was going. I told them I was going back to my seat.

“I did not understand why my answer made them so angry. They treated me really as if I was not a person, it was humiliating.”

The officers asked him to show his identification, but could not tell him why they were asking – and without a reason he refused to cooperate.

“It made me very angry, with such an anger I had not had before. You see them when they enter the carriage, they act like hunting dogs tracking down a piece of meat; they walk past 100 people and stop at my seat.”

He said he decided to make a stand and refused to show them his identification without good reason. The altercation ended with him telling the police their methods reminded him of those used in Nazi times by the SS.

The police took him off the train and to a police station where they said if he did not cooperate and show them his ID they would lock him up.

“Lock me up! The only thing I probably did was to ‘look illegal’.”

And despite never getting a good explanation of why he should, the student eventually showed them some ID in order to get out and go home.

But the SS comment resulted in a charge of slander, which was dismissed by a court on Tuesday. Crucially, one of the court hearings produced the admission that the police officers had checked his ID because he was black – and for no other reason.

This was challenged by his lawyer Sven Adam, who told The Local, “It is a scandal. It’s unconstitutional and illegal – one cannot be forced to identify oneself if there is no suspicion or danger.”

Adam said he was determined to appeal the verdict, and would take the case to the Constitutional Court if necessary.

“The decision will certainly provide fertile ground for racism on trains and on the streets,” he said.

But on Tuesday the Koblenz administrative court ruled that such reasoning was acceptable, prompting harsh criticism.

“This is of course complete nonsense,” human rights lawyer David Schneider-Mensah told The Local. “And the judge who passed this verdict is clearly not fit for his office and should be dismissed.”

“Of course there are objective criteria which the police can use to decide who to spot-check – people who are behaving suspiciously, for example,” he added. “But any criteria based purely on people’s appearance are illegal.”

Schneider-Mensah has fought many similar cases in the past. “Most police spot-checks in Germany are illegal in my experience,” he said.

“The police often appear to be running secret border checks, which are outlawed by the EU, since the Schengen agreement clearly means that we have no border controls.”

A spokesman for the court told The Local that the judge had decided spot-checks were only effective when carried out according to an officer’s assessment of the person’s appearance.

“There is no way they can check all 500 or so people on a train, they have to be selective,” he said. People who appear to be foreign were more likely to be breaking German immigration and residency laws than those who seemed German, he said.

Trains going to large cities such as Frankfurt and Berlin were the most likely to be checked, since they are most used by people breaking such laws, he said.