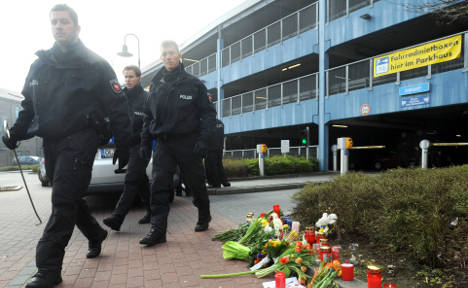 “The perpetrator is still unknown,” local police spokesman Werner Brandt told a press conference on Monday. Police have not yet released further details about the young man, because relevant facts “have not yet been 100 percent verified.”

“I can say that the crime was sexually motivated,” said Brandt, adding that the exact cause of death is also yet to be disclosed, for tactical reasons.

“Our current investigations suggest the place the body was found was where she murdered,” he added.

The girl, identified as only Lena, had gone out with a boy of the same age at 5 p.m. Saturday evening to feed ducks.

The pair had cycled into the car park, adjacent to a multiplex cinema, between 5:30 p.m. and 7 p.m.

A security guard discovered Lena’s body a few hours later and alerted the emergency services, who failed in their attempts to resuscitate her.

The boy is still in shock, according to Brandt. “His testimony is still very fragmentary,” he said. It remains unclear whether he saw the murderer, or whether they had been followed. He had gone home and told his parents that she was missing, who then contacted Lena’s parents.

Police had kept the investigation secret until Monday for strategic reasons, but are now appealing for witnesses who may have seen the two children and anyone suspicious near them.

“We are at the start of our investigation,” said Brandt. Video surveillance footage from the car park is currently being inspected.