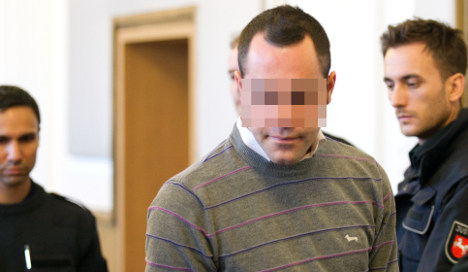 The 24-year-old Italian named only as Juri C., had smuggled the explosives into Osnabrück football ground in his underwear, the court heard.

He had become entangled with the violent football hooligan “Ultras” gang from Münster, who had helped to organise the attack.

Text messages and internet chat protocols showed their involvement – and the court heard that Juri C. Had been keen to make himself seem important to them.

His family in Naples sent him to live with an uncle in Münster, North Rhine-Westphalia, after he had repeatedly got into trouble with the police.

The German Football Association (DFB) has welcomed the sentence, and the Osnabrück district court judge said that the attack had been planned carefully in advance and was driven by “rage.”

“This is a warning,” the DFB general secretary Helmut Sandrock said. “Football stadiums are not a place exempt from the law, and criminal acts will be punished.”

The 33 injured at the match between Preussen Münster and VfL Osnabrück on September 10, 2011 included 17 police officers.

As well as time behind bars, Juri C. will have to pay €50,000 in damages to victims of his attack, a police spokesman said.

“Violence at football matches, especially of this dramatic measure, will not be tolerated,” said the regional head of the German police union GdP, Dietmar Schliff.