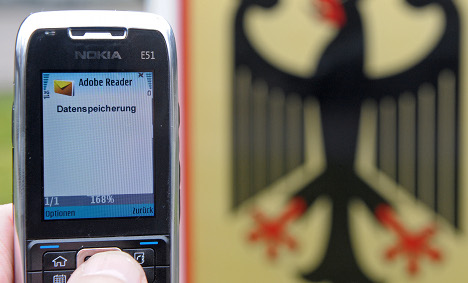 The measure enables governments to collect and store personal phone and internet data for six months, without any need for legal justification.

Opponents say the law would legalise the state spying on its citizens – something that Germans have had more than enough experience of under the Nazis and the Stasi, the East German secret service.

But on Thursday, Rainer Wendt, chairman of the DPolG police union, told the business daily Handelsblatt that France’s apparent use of internet research to track down the Toulouse terrorist showed how Germany needed to adopt the law.

“The lack of a data collection law makes it more difficult to follow who the person had contact with,” he said, noting that “the internet is an ideal place for individual radicalisation because it promises widespread anonymity.”

Although the German government adopted the law in 2007, the country’s Constitutional Court overturned it in 2010, leaving the government desperately seeking a compromise.

Pressure has increased from the European Union this week, with Brussels giving Berlin four weeks to adopt the EU law – or face a show-down at the European Court.

But Germany is highly sensitive about protecting personal privacy, and junior coalition partner the Free Democratic Party (FDP) has positioned itself firmly against the law as it stands.

“The FDP’s position is that people should have the individual right to decide who gets their information or not,” party spokesman Daniel Kölle told The Local on Friday.

He said Germany could wait out European Union procedures, noting that there more than 80 such complaints filed against Germany on other matters and that they take years to work out.

The European measure took effect in 2006 in the wake of the terrorist attacks in Madrid in 2004 and London in 2005.

Justice Minister Sabine Leuthauser-Schnarrenberger of the FDP, says it is out of date and needs to be revised.

In early 2011 she released her “quick freeze” proposal, which is based on how information is collected and stored in the United States and Canada.

Telecommunications companies already collect data from their clients, she noted. If someone is under suspicion, the police or state prosecutors can require that the person’s data be “frozen” and not written over or deleted by new information, as is usually the case.

Authorities cannot see the information until they get a court order allowing them to do so. If that is obtained, then the information can be “thawed” out. In the US this practice is known as “quick freeze, fast thaw”.