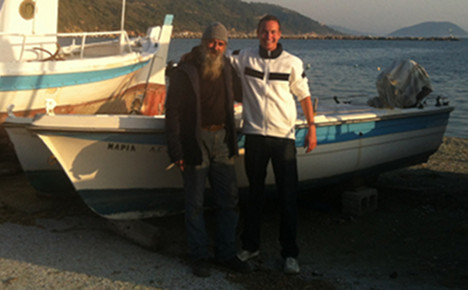 “I didn’t get the idea of buying the land from that article,” said Steffen Piermaier, a 35-year-old Bavarian business manager who lives out of hotels as he is always on the road for work.

“But, it was pretty easy to realize that this was the time to get a good deal in Greece, both on land and on labour to build my dream home.”

It didn’t take Piermaier long to make a decision. After seeing pictures of a colleague’s home on the island of Skopelos, dubbed the greenest in Greece, he found a plot of land for sale, called a local lawyer and received the deed before he even set foot in the country.

He is now selling his Porsche to finance building a holiday home – despite the misgivings of his family and an unpleasant reception when he first landed in Athens.

“My family thinks I’m crazy,” he said. “They want to know why I didn’t buy a house in Germany. But, I think it would be crazier to spend more money on a small home outside of Stuttgart than I could on a place overlooking the sea, which I can also use as a rental while I’m working abroad.”

Ditching the suit he usually wears to manage German and Scandinavian operations for a major electronics store chain, the new landowner came to Greece for the first time last week unsure of what to expect.

His fears that anti-German sentiment sparked by tight austerity measures to get bail-out money could mean Greeks would not welcome him, seemed justified on day one when he bumped into a demonstration in Athens.

Although he does not speak Greek, he could make out the words “neo-Nazis” on some of the placards they were carrying.

“I got a little uncomfortable, not knowing what the signs were referring to. So, when a protester asked where I was from, I told him Norway,” he said.

“It turned out he actually knew Norwegian because his brother lives there. I decided to get out of there.”

And although the protest organiser said the signs were referring to Greek politicians, not Germans, Piermaier’s concern is not completely unfounded; many Greeks resent Germany’s attitude toward their financial crisis.

In Psiri, an up-and-coming corner of Athens filled with shops and restaurants, Pentelis Melissinos greets a constant stream of tourists, who want the sandals his family has been making for three generations.

He is cross – agreeing with a recent statement made by German economic historian Albrecht Ritschl, who criticised Germany for its stance on Greece and called his own country the worst debtor nation of the past century.

“Germans have quite the nerve to judge us when they are the ones that never repaid their debts to Greece after WWII,” said Melissinos. “They forced our country to pay millions in loans to them and destroyed our infrastructure. They have only paid back a fraction of that amount.”

“Germans look down on every country that isn’t Germany,” he continued. “But, you know what? I don’t trust Greek politicians either. Both governments have betrayed their people.”

Luckily for Piermaier, the reception from his new neighbors on Skopelos was much warmer. The island, in the central-northwest Aegean Sea, has a population of only 5,700 and is the kind of place where a newcomer is immediately noticed.

Arriving by ferry, Piermaier was greeted at the dock by his lawyer who had set up meetings with the locals. His first stop was to meet Dmitri, an 87-year-old deliveryman who uses his donkey to cart building materials up and down the island’s tiny roads.

Click here for pictures of Piermaier and his new home.

“I told him my name was Steffenos,” said Piermaier, laughing. “And I let him know I would use his services when building my house. He didn’t understand so I explained with gestures that his donkey would be able to eat. He smiled and hugged me, saying ‘Steffenos. My best friend.’”

By his second day, ‘Steffenos’ Piermaier had invitations to his neighbours’ homes for lunch and dinner. “The people here are incredible, really,” he said. “They seem removed from the political problems in Athens. They just want to improve tourism to their island and continue on with their simple way of living.”

But theirs is an idyllic scene that many Greeks can only dream of. Back in Athens where the poor, graffiti-covered parts of town seem to be getting larger, a sense of hopelessness has invaded the psyche of many young people.

Georgia Johnson, a 30-year-old art seller, doubts whether she will ever marry or have children. Having recently seen her wage cut literally in half, she said her main concern was finding a better job.

“I don’t even think of having a family anymore,” she said. “When would I have time? I need to help support my grandmother, whose pension is now less than her monthly rent. I barely have enough to pay my rent either.”

Despairing of finding work at home, and although she speaks fluent English, Johnson is now also learning German with the hopes of finding a job abroad.

“I have no problems with Germany. In fact, I would like to live and work there,” she said. “But, I don’t know if they would welcome a Greek person in the workplace.”

While she may soon be heading north-west, Piermaier is intent on travelling in the other direction to Skopelos more often.

Dotted with lemon and orange trees and surrounded by clear seas splashing against the rugged coastline, it is easy to see why Skopelos’ main industry is tourism.

But Piermaier thinks marketing efforts could be improved, particularly to Germans. He plans to work with the locals to establish a business to provide holiday rentals, island activities and advice to travellers.

Before he heads back to work in Germany, he wants to put down roots in Greece, and perhaps play a small part in helping improve relations between the two countries.