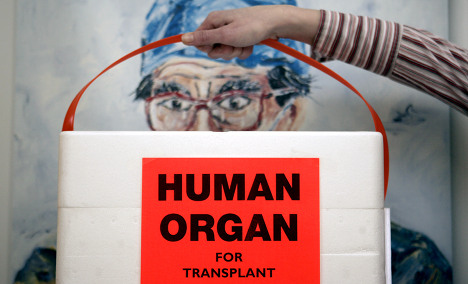 Lawmakers who normally use the dais at the Bundestag, or parliament, to lash out at each other, instead used the debate to tell personal stories to explain their support for the measure.

Green party leader Jürgen Trittin told lawmakers how he had to watch as his partner died following a bike accident. “In this situation I had to tell her daughter, her parents and her best friends,” adding that in such a situation loved ones don’t want to have to interpret a dying person’s wishes.

It would be much simpler and better for everyone concerned if people had already made it clear whether they want to donate their organs, Trittin and others said during the debate.

Some 12,000 critically ill people in Germany are on a waiting list for organ donations and several die every day for lack of a life-saving organ.

The new organ donor law will require public and private health insurers to send everyone over the age of 16 information about how to become an organ donor.

The person insured will have the options of immediately becoming an organ donor, saying no, or putting off a decision, said Wolfgang Zöller of the Christian Social Union party (CSU), which is part of the ruling coalition. Zöller represents patients’ interests in the Bundestag and has decades of experience in health policy.

The insurance companies will be required to re-send the organ donor request information every two years to their customers, Zöller noted.

Thursday’s debate comes after years of discussion over organ donation. The bill is expected to become law by July.

“It’s about responsibility that we must take on for people who need our help,” said Frank-Walter Steinmeier, the head of the opposition Social Democratic Party (SPD) faction in the Bundestag.

Left party Chief Gregor Gysi and others said they did not think an organ donation law would result in the commercialization of body parts.

Health Minister Daniel Bahr of the coalition’s Free Democratic Party (FDP), said clinics must have an organ donation coordinator, who would also be responsible for making living donations easier.

“Whoever decides to make a living donation should not have any disadvantages,” he told lawmakers.

But there might be some changes before the measure becomes law.

Green party politician Elisabeth Scharfenberg is pushing for a change to the bill for privacy reasons. She wants insurance companies to forgo a planned provision that would automatically register someone’s organ donation wishes on their insurance card.

Scharfenberg wants people to be able say whether they want that information on their insurance card or not.

“People on a waiting list will die while waiting for an organ.”

She said it should be explained that family members of fatally ill people who are organ donors should be given the chance to say their goodbyes to a person while he or she is still alive, and not have to bid a cold corpse farewell.