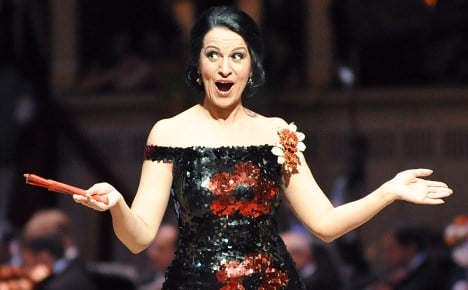 The pulsating hue of magenta fills the room. Tones and drones merge and overlap. La Monte Young and Marian Zazeela’s “Dream House” is a “continuous frequency environment in sound and light with singing from time to time.” Be immersed in these dreamy environs this week when Villa Elisabeth dons the “Dream House” guise for Maerz Musik. Live concerts occur throughout the duration. Check the schedule for details.

Europe’s biggest improvised theatre festival starts Friday in Berlin. Lucky for us anglophones, English Theatre Berlin is getting in on the action by presenting a handful of shows including a play inspired by two theatrical greats, Chekhov and Woody Allen. “Improv Can Do Anything!”

Images of Frederick the Great by Adolph Menzel

Adolph Menzel spent several years creating hundreds of woodblock engravings to illustrate a book on the history of Frederick the Great. These images, along with some of Menzel’s later paintings join works by Antoine Pesne and Daniel Nikolaus Chodowiecki for an exhibition at the Alte Nationalgalerie in Berlin. Spend some time ruminating on the Prussian king as an “enlightened monarch,” a “supreme military commander,” and “a friend of philosophy and the arts.” It is after all the 300th anniversary of Old Fritz’s birth.

In the early 20th century dance took a revolutionary turn. Inspired by the modernity of the era, dancers and choreographers like Isadora Duncan and Mary Wigman joined their innovative comrades in art, design, music, and literature and began creating vivid new works. For this extensive exhibition, the German Dance Archive Cologne has drawn from its cache of documents, photographs, films, and recordings to present a dance picture of the period.

No one throws a party quite like the Gypsies. There’s something about their music that you just can’t resist. Even the most diehard wallflowers will have their toes tapping if not their hands clapping along to those alluring strains of the violin and strums of the guitar. Head to Hamburg this weekend and dance to the music of the Gypsies. Local family band the Familie Weiss release their new album at the festival opening Friday night.

Angela Gheorghiu is “the world’s most glamorous opera star.” So says the New York Sun. Twenty-two years ago, the Romanian soprano made her professional debut in the role of Mimi in La Boheme. Tuesday night she belts out those Puccini arias in Hamburg. Get ready to be wowed.

It has been 75 years since George Gershwin had his last hurrah. Pay your respects to the late great American composer Thursday when the LeipJAZZig Orchestra plays tunes from his beloved repertoire to kick off the 17th LeipJAZZig Festival. “I love you Porgy!”

Sex, fish, and the end of the world converge in San Francisco playwright Peter Sinn Nachtrieb’s Boom. Based on science writer Stephen Jay Gould’s 1989 book on evolution Wonderful Life, the fantastically funny play was dubbed a “Grandly wacked-out apocalypse fantasy” by the Washington Post. Grab a seat at BeMe Theatre’s production this week and watch a marine biologist and a journalism student attempt to change the course of the world.

From Hokusai’s “Great Wave” to Hemingway’s “The Old Man and the Sea,” artists and writers have always turned to the water for inspiration. Joining the league of water-lured creators, Munich composer Petra El Raphael has penned a piece for choir called “Asi Sea – the Response of the Sea.” Sit in the audience Sunday morning and take a virtual escapade to the shore. Works by Poulenc, Ravel, and others round out the seaworthy program.

Daily life in Japan is portrayed in i-camp theatre’s new work “Shinsai – Shattering Gods,” weaving in aspects of the earthquake, which occurred just over one year ago. Merging dance, theatre, music, and video, “Shinsai” focuses on the individual perceptions of those who lived through the catastrophe. Go see their powerful piece and feel good about helping a good cause. All proceeds benefit an organization that supports those still struggling to rebuild their lives after the devastation.