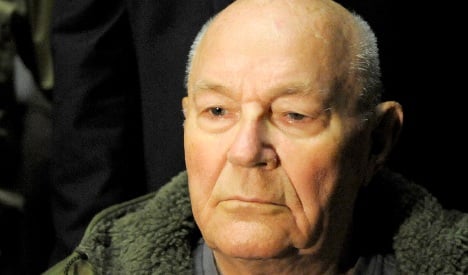 “We have been tasked by Mr Demjanjuk’s family with transporting the body to the US,” a spokesman for the Oberaudorf undertaker in southern Germany said.

“That will probably happen at the beginning of next week,” he added.

The legal requirements are currently being dealt with, he added but said as soon as they were complete, Demjanjuk’s body could be sent to Cleveland in Ohio.

Demjanjuk, who was stateless after being stripped of his US citizenship, died at the age of 91 in a home for the elderly in the southern state of Bavaria, police said Saturday.

He appears to have died of natural causes, a spokesman for the public prosecutor’s office said Monday after a post-mortem exam gave no clear indication of the exact cause of death but also found no sign that anyone else was involved.

Last year a German court sentenced the Ukrainian-born man to five years in prison in connection with the six-month period he was a guard in Poland at the Sobibor death camp in 1943.

However he was released pending an appeal, having already spent nearly two years in prison, as he was deemed unlikely to abscond.

After World War II, Demjanjuk went to live in the United States, raising three children there and working in the auto industry. After a legal case brought in Israel in 1986 collapsed, he returned to the US.

But he was stripped of his citizenship in 2002 for lying about his past and finally deported from the United States to Germany in 2009 to face trial.