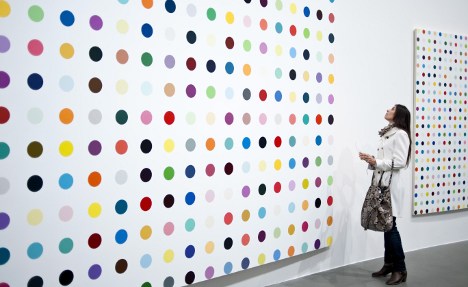 A Hirst painting on display in Rome. Photo: DPA

Monopol, a glossy monthly art magazine, has a photo of Hirst on the cover of its April edition, to be published on Thursday, with the exclamation “Oh Damien”.

Inside it has a long story examining the big Hirst retrospective exhibition which opens at London’s Tate Modern in April.

But the magazine said Hirst refused permission to print his art to accompany the story because editors would not let him check the story first.

In protest, editor Holger Leibs decide to leave the spaces white. “We decided to keep the layout of the pages – including the unchanged text of our writer,” he said in a statement.

“We did not cover up the gaps that resulted, rather left them visible.”

He said Hirst’s refusal was the first such problem the magazine had run into since being launched in 2004.

But Hirst’s spokeswoman told The Local they had denied permission to use the pictures when they found out who had contributed to it – and had never asked to check the story.

The author, Ben Lewis, has written about and made a film criticising Hirst and the contemporary British art scene, comparing the prices paid for new artworks with global economic bubbles.

“The request [to use the pictures] was denied because the author of the article, Ben Lewis, has previously written about the work of Damien Hirst, but the articles were characterised by glaring factual inaccuracies,” said Jude Tyrell, Hirst’s spokeswoman and director of his company Science Ltd.

“At no time did Science Ltd, ask for copy approval or for the magazine to withdraw the article.”