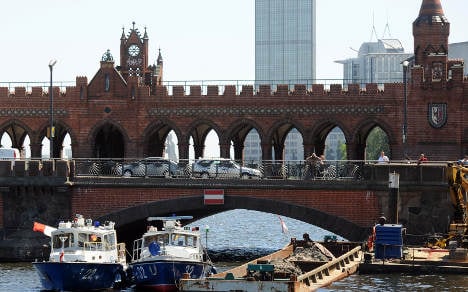 The BMW Guggenheim Lab, which is on a tour of cities around the globe, had been scheduled to arrive on a vacant lot in the German capital in May for a two-month stint before continuing to Mumbai.

But organisers pulled the plug on the project in the Kreuzberg district, a BMW spokesman said, after several threats attributed to residents who are angry that it could contribute to rent increases in the area.

“We’re not leaving Kreuzberg because of protests but because of the high threat level determined by the police, the threat of violence” the spokesman, Thomas Girst, said.

The Guggenheim added in a statement: “The Foundation regrets having to make this decision, as the purpose of the BMW Guggenheim Lab is to create a space for public discussion, open to the widest possible range of views.

“While we welcome vigorous debate, we cannot risk the possibility of violence, as raised by a small minority.”

Girst said it was not immediately clear whether the Lab would move to another district or have to cancel the Berlin leg of the tour entirely.

The BMW Guggenheim Lab, which calls itself a forum to discuss urban architecture, technology and sustainability, plans to visit nine cities in six years.

Kreuzberg, one of the capital’s central districts, has traditionally been home to a lively German scene of left-leaning political activists and artists alongside a large Turkish and Arab population.

After years of hype around areas in the former communist east, Kreuzberg has seen a revival in recent years and in 2011 saw the biggest increase in average apartment rental prices in the city, according to local statistics.

Opponents of the project said in a statement online that they feared the development of the lot on the banks of the Spree river would drive the gentrification of the area.

“The so-called ‘Lab’ is a rotten image project by the conservative corporation BMW and will mean increasingly rising rents in the neighbourhood as well as the de facto privatisation of the property and was of course planned without any participation of the residents,” they said.

The investors who own the prime slab of real estate have said they later plan to erect office buildings and hotels there.

Berlin ranks as one of Europe’s most affordable cities but has seen a sharp rise in rents since the Wall fell in 1989.