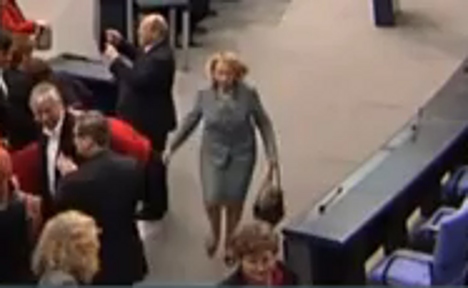 Parliamentary Speaker Norbert Lammert told the politicians and public figures in the Bundestag that the election of Joachim Gauck had been completed in just one voting round.

A soon as Lammert made a jokey invitation to the buffet, Hannelore Kraft, state premier of North Rhine-Westphalia, made a dash for the door.

“The buffet is not necessarily better, but certainly fresher than as it would be after three votes, therefore we can meet upstairs in a particularly good mood,” said Lammert, closing the formal proceedings.

While people were still clapping at the idea of lunch, Kraft weaved her way through the delegates, handbag firmly gripped, and ran for the exit.

More than 20,000 people had watched the clip as of Tuesday lunchtime, with many viewers making suggestions about what had prompted her dash.

Speculation that she was really hungry and wanted to get to the buffet first, or that she was in desperate need of the toilet was sadly dismissed on Tuesday by her spokesman.

“It was not hunger; it was her plane,” Thomas Breustedt told Der Spiegel. He said she had to rush to get to the airport in order to catch her flight back to Düsseldorf.

Breustedt also offered reassurance to those concerned she may have been flying on an empty stomach as she had to skip the buffet. “That was no problem. Ms Kraft had eaten something while the votes were being counted,” he said.