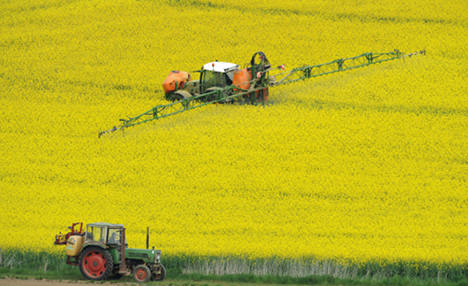 The station’s Wiso science show, said it inspected 12 fertilizers used in agriculture and domestic gardens and found that in all but two the uranium levels were many times the recommended level of 50 milligrams per kilo.

Uranium is a heavy metal that in its natural state is only slightly radioactive but is toxic to humans, especially when it gets into drinking water. It can affect the blood, bones and especially kidneys.

Babies and small children are especially affected by high levels of uranium in drinking water because their fluid intake is two to three times that of adults relative to body weight.

The Monday evening programme said the worst offender was blau, Gute Wahl a garden fertilizer with a uranium concentration of 1,388 mg per kilo – 27 times the recommended level. The Federal Environmental Office recommends that such a product not be sold.

But since there is no legal limit for the amount of uranium fertilizer can contain in Germany, more than 100 tonnes of uranium ends up in German soil, the show said.

Uranium, a heavy metal, is not so problematic when it’s used for plants, and is naturally found with phosphate, which is a crucial part of fertilizer, but it is highly mobile and it can end up in groundwater, according to Dr Geerd A. Smidt of the Jacobs University in Bremen.

Apart from being a substance in fertilizers, there are areas in Germany where the soil has a naturally high concentration of uranium, the programme said. An expensive treatment to purify the water is the only way to make it safe to drink.

High concentration of uranium can cause cancer, according to internist Heike Windmann. Small children are particularly at risk, as they react with more sensitivity to the substance.

Matthias Wolfschmidt from Foodwatch recommends using mineral water when preparing baby food, since such water is not allowed to contain more than two milligrams of uranium per litre. He also recommends giving young children mineral water to drink until they reach school age.