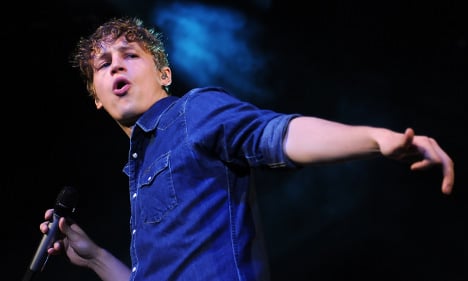 New industry figures show sales of German music at the highest levels for 20 years. “It is obviously in again to discuss certain things in our own language,” said Florian Drücke, manager of the Federal Association of the Music Industry.

“It hits a nerve at the moment, although we do not want to call it a renewed German Wave,” he said. The latest figures from Media Control show that 55 percent of the 100 top-selling albums were produced in Germany.

The most successful national album of 2011 was Lindenberg with “MTV Unplugged – Live from the Hotel Atlantic,” which came second overall to “21” from Adele.

Thursday sees the Echo awards in Berlin, where alongside established artists such as Peter Maffay, Udo Lindenberg and Herbert Grönemeyer, newcomers such as Tim Bendzko are in the running for a prize.

It was announced on Monday that the German band Rammstein will play with Marilyn Manson at the Echo awards, playing Manson’s 1990s hit “The Beautiful People”. Rammstein is nominated in four categories including most successful German act overseas.