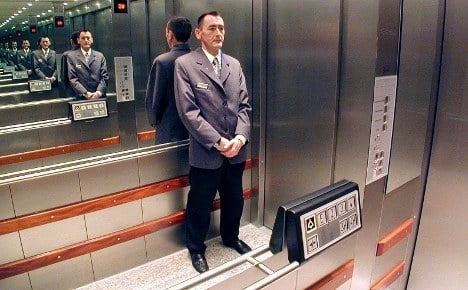 Not the lift concerned. Photo: DPA

The mechanics were in the bottom of the goods lift shaft on Thursday morning when the cable holding the two-tonne lift above them broke, sending it plummeting towards them.

Authorities investigating the accident, which happened in the Tempelhof area of Berlin, say the men failed to jump into the bolthole at the bottom of the shaft – but made a dash for the door instead.

“The steel supports mounted on the ground create a protected hollow about a metre high, in which the man would have survived,” a spokesman for the investigating safety officer told Friday’s Süddeutsche Zeitung newspaper.

But he said both men raced for the exit of the lift shaft when they realized the lift was heading for them. One managed to get out, but his 37-year-old colleague was not quick enough and was crushed to death.

“The men possibly followed their human instincts to flee,” said the spokesman.

The lift was driven by hydraulic beams, but while they were being worked on, it should have been held above them by cables.

“It is still unclear whether it was a fault in the material which led to the cable break, or if it was wrong handling,” said the spokesman.

The safety experts’ report will determine whether charges are pressed against the men’s superiors. There will also be investigations into whether the mechanics were trained well enough.