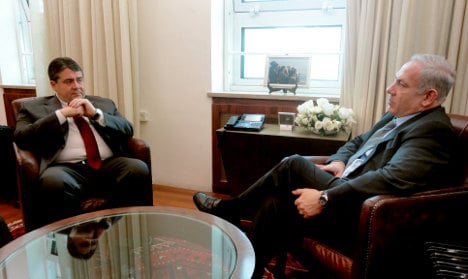 Gabriel, one of three possible Social Democratic challengers to Chancellor Angela Merkel in next year’s general election, later admitted he had used a “very drastic formulation,” but said that he was only describing the situation as experienced by people in the town.

“For Palestinians this is a lawless zone,” Gabriel wrote on his Facebook page. “It is an apartheid regime, for which there is absolutely no justification.”

He had previously met Israeli Prime Minister Benjamin Netanyahu and Palestinian Authority Prime Minister Salam Fayyad, and wrote about his desire to see a stop to Israeli settlement expansion.

He said he had told Netanyahu that support for Israel among the German and European public was being harmed by his settlement policies.

His next entry is his comparison between Hebron and apartheid, the system of strict racial segregation imposed on the people of South Africa from the late 1940s until 1994.

Hundreds of passionate comments and a longer description of his opposition to Israeli settlement policy later, Gabriel returned to the fray to clear things up.

He said it was clear to him that the apartheid comparison was an extreme one. “But Palestinians experience exactly that in Hebron in their situation. The drastic description is what I, and not only I, thought of during the discussions and tour in Hebron.”

But he apologised to Israel for the comparison. “If my formulation led to the misunderstanding that I wanted to put Israel and its government on the same level as the old apartheid regime in South Africa, I am sorry,” he said. “I did not and explicitly do not want to do this, as this comparison would be more than unfair to Israel and would downplay the old South Africa.”

He said he had simply tried to express the anger he felt even as a supporter of Israel, at what he had seen the Palestinians experience in Hebron.

Gabriel’s comments drew instant condemnation from the Christian Democratic Union whose Secretary General Hermann Gröhe said in Die Welt that the SPD leader should apologise for what he described as a “diatribe,” while CDU foreign policy spokesman Philipp Mißfelder told the Bild newspaper he found Gabriel’s comments unacceptable.