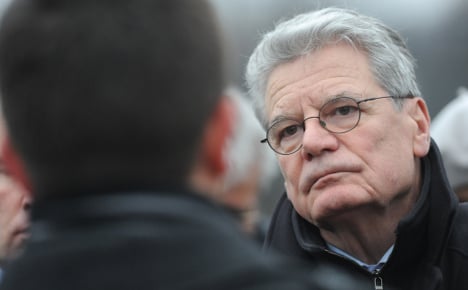 Chancellor Angela Merkel, who also grew up in the communist state, threw her support in February behind Gauck, 72, following the resignation of her former ally Christian Wulff as head of state in a maelstrom of sleaze allegations.

Gauck, a Lutheran pastor and former head of the vast archives left behind by the despised Stasi secret police after German unification in 1990, enjoys the support of all mainstream parties, meaning he has a virtual lock on victory.

ZDF public television called the forces that led two “Ossis”, or former East Germans, to the pinnacle at once nearly 23 years after the Berlin Wall fell “almost a political miracle”.

A special assembly comprised of deputies and regional representatives will convene on Sunday morning for an ecumenical service before taking their seats for the vote in the glass-domed Reichstag building in central Berlin.

Only the socialist Left party, which includes several former East German communists, opposes Gauck, and the party has nominated renowned Nazi hunter Beate Klarsfeld to register its protest against the popular pastor.

Gauck has said he will need to make the transition from self-styled “teacher of democracy” and sought-after public speaker to statesman when he takes over the largely ceremonial post as a kind of moral compass for the nation.

“I will really have to work on myself and take advice,” the plain-spoken candidate told news magazine Der Spiegel in its current edition. “How can I stay authentic and not come off as a provocateur?”

The magazine said Gauck was perhaps ideally suited to help guide a nation that at times appears afraid of its own strength due to its tumultuous history.

“He wants to relieve the Germans of their fear of freedom, of the confusion of an open society and the variety of options available to them,” Der Spiegel said in its profile.

“He would like to lift them out of their civic lethargy, drive them to taking action, to participating in the arduous game of democracy.”

Gauck became a clergyman under the communist state and used the relative freedom granted to churches to defend human rights. He later became a leading figure in the peaceful revolution that helped topple the Berlin Wall in 1989.

He cites freedom as the theme he wants to dominate his presidency, and has expressed a desire to see a country that has lived through two dictatorships regard its liberty as a “gift” to be used wisely.

Gauck also told Turkish newspaper Hurriyet this week he would make integration of immigrants a priority of his term.

Although Merkel backed Wulff, a fellow conservative, over Gauck, who does not belong to a party, in the last presidential election in June 2010, her own experiences of state repression have led her to declare a similar set of political values.

Merkel, who only entered politics after the Wall’s fall, and Gauck, also mark a break with the long tradition of German leaders being married, often Catholic, family men.

The chancellor is childless and remarried after a divorce, while Gauck is estranged from his wife and has resisted calls to divorce her and marry his long-term girlfriend, 52-year-old journalist Daniela Schadt.

However political scientist Klaus Schröder called it “a fluke” that two easterners had reached the top of German politics at the same time, saying it would take another 20 years before westerners relinquish their overwhelming dominance of government, business and media.