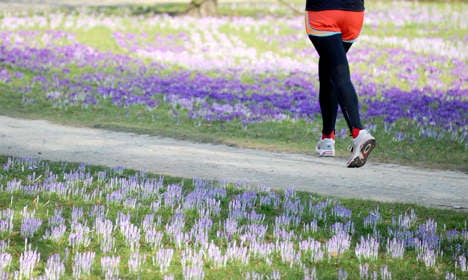 Skies will remain clear across most of the country on Wednesday night, with just a slight fog expected to develop in some areas in the early hours. In the north east, however, cloudy weather has been forecast along with a sprinkling of very light rain.

Temperatures will dip below the freezing point for what may be the last time this season, as clear areas should see lows of minus two degrees Celsius, while areas under cloud will stay at a more friendly two degrees above zero.

The clouds that develop over the north east during Wednesday night will stick around for much of Thursday, but rain showers will be few and far between. The sun may even break through the cloud cover, raising temperatures slightly.

It is on Thursday that the temperatures will encourage the removal of jumpers, with “highs of between 12 and 20 degrees are expected,” said DWD meteorologist Thomas Ruppert.

Thursday night will be murky around the northern and western states but clear in the south and east, where it will be colder. Temperatures will stay above freezing though, at between two and seven degrees Celsius.

Friday may start foggy, and in the north west of the country thick clouds are to be expected. There will be no rain, and temperatures are set to stay around 14 and 18 degrees for most of states, but reach as far as a balmy 24 in the south west.

Rain is expected to fall on the north western states throughout Friday night and like Thursday night; temperatures should stick between two and seven degrees.

This rain will continue to fall during the day on Saturday, spreading across the north of Germany. In the south, however, there will be a chance of sun and temperatures as high as 20 degrees Celsius.