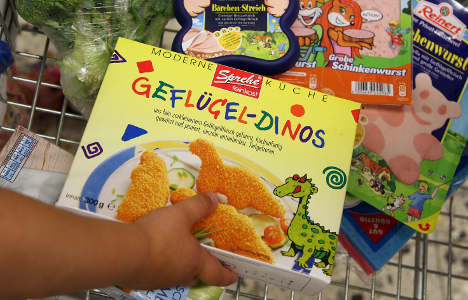 A survey carried out by watchdog Foodwatch found that nearly three-quarters of food products marketed at children should be regarded as “sweet and fatty snacks” and should only be consumed rarely.

Foodwatch identified 1,514 products aimed at children either through the labelling (“for kids”), through marketing tie-ins involving cartoon characters or free toys, or through special offers connected to online games.

The products were then assessed according to the “nutritional pyramid” devised by a government-supported consumer organization.

This pyramid, a chart divided into three levels, puts particularly “sweet and fatty snacks” in the red category at its tip, meaning that they should only be consumed rarely. Of the 1,514 products tested, 1,109 fell into this category.

The yellow level in the middle, including milk and meat products, contains food that should only be consumed “in moderation,” while the green level, including fruit, vegetables, cereal products and water, at the base should be consumed “often.”

Apart from the 73.3 percent in the red category, six percent of the children’s food was in the yellow category, while only 12.4 percent fell in the green category.

In the wake of the study, the Green Party has called on Consumer Minister Ilse Aigner to take concrete measures to protect children from the marketing of unhealthy food.

Green Party deputy leader Bärbel Höhn told Wednesday’s edition of the Frankfurter Rundschau newspaper that the food industry was not keeping its promise “to end the tactics of tempting children with toys.”

Höhn added that by refusing to put colour-coded nutritional advice on food labels, the government was helping “to ensure that fattening food would continue to be sold as allegedly good ‘children’s products’.”