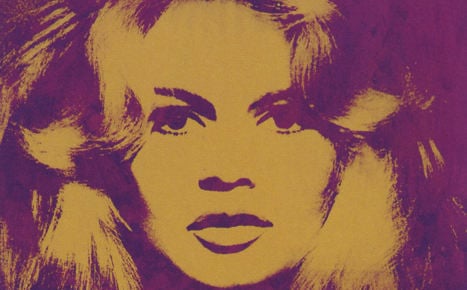 One of the most prized pieces to go under the hammer at Sotheby’s on 22 and 23 May is an Andy Warhol portrait of Bardot which Sachs commissioned in 1974, five years after the couple divorced, which is estimated to fetch up to £4 million (€4.8 million), the auction house said Tuesday.

Sachs wooed Bardot by having a helicopter fly over her villa on the French Riviera that showered her with hundreds of red roses.

A 1959 photograph of the French bombshell by Richard Avedon, shot a few years after she had risen to international stardom, is also up for sale with an estimate of £40,000 to £60,000.

The focus of the collection is a group of Pop Art masterpieces by Warhol, Tom Wesselmann and Roy Lichtenstein that Sachs acquired in the late 1960s and 1970s.

Sachs, who committed suicide last year aged 78, commissioned many of the pieces himself or purchased them directly from the artists for his apartment in the Swiss ski resort of St Moritz.

One of the other outstanding pieces is Warhol’s “Flowers”, a canvas epitomising the bold colours of the Pop Art movement, which is expected to sell for between £3 million and £4 million.

Sachs and Warhol were lifelong friends and in 1972, Sachs put on Warhol’s first major European exhibition at his Hamburg gallery. He spared Warhol’s blushes by secretly purchasing half the works when there were few buyers.

Cheyenne Westphal, chairman of Contemporary Art at Sotheby’s Europe, said the combination of Sachs’ taste and Bardot’s influence “makes this assemblage among the most desirable single owner collections ever to come to market”.

When Sachs took his life at his Swiss chalet in May, his relatives released a suicide note in which he explained he took his life because of what he dubbed the “no hope illness A,” thought to be Alzheimer’s.

Bardot said she was “literally destroyed” by the news of his death.