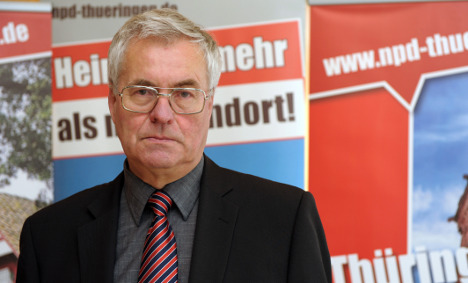 Frank Schwerdt, deputy leader of the far-right National Democratic Party (NPD) admitted having had one of the self-styled National Socialist Underground (NSU) members as a driver at least once in the 1990s.

The terrorist organization murdered at least ten people, including a policewoman, and robbed several banks in the past decade. They have also been linked with at least one bombing in Cologne in 2004.

Speaking in a TV interview aired on Monday evening on the ARD state broadcaster, Schwerdt, one of three NPD deputy leaders, confirmed that Uwe Mundlos had worked for him as a driver at least once in the late 1990s.

Mundlos and Uwe Böhnhardt, died in a campervan surrounded by police in November last year, after a bank robbery. One shot the other and them himself. Their alleged accomplice Beate Zschäpe turned herself in a few days later.

Schwerdt’s admission is likely to fuel the argument for a ban on the NPD, as it adds to evidence of a link between the political party and violence.

A photo dated January 17, 1998 also shows Schwerdt with Zschäpe at a demonstration in the eastern German town of Erfurt. Ten days later, Zschäpe and Mundlos went underground, and police failed track them down until last November.

Schwerdt also admitted meeting André K., a suspected accessory to the NSU, in Berlin three weeks later. He claimed that André K. asked him to provide support for the group and he refused.

Schwerdt has been a member of the NPD since the 1960s, and is considered a key figure in its educational work. Media reports say he was an important ideological influence on Ralf Wohlleben, another suspected NSU accessory currently in custody for supplying a weapon to the trio.

In a separate development, German authorities arrested 24 people in dawn raids on Tuesday, targeting 33 suspected members or supporters of a neo-Nazi group.

The 6:00 am raids were part of a probe into the banned group Aktionsbuero Mittelrhein, prosecutors in the western German city of Koblenz said in a statement.

They also launched a probe into allegations of grievous bodily harm, serious breach of the peace and use of banned symbols.

According to prosecutors, the “Aktionsbuero Mittelrhein” gathered information about political opponents and then “outed” them publicly in a bid to intimidate them.

“All participants were aware that a climate of hate was being created and fears were being stoked,” the statement added.

“Another area of activity was the openly violent acts against members of the left-wing scene, both locally and further afield,” added the prosecutors, who also stressed there was no link to the NSU.